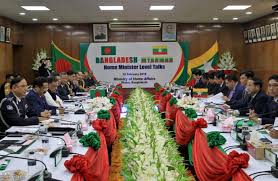 Bangladesh handed over a list of 8,032 Rohingya people, which includes of 1673 families for repatriation to Myanmar on Friday.
Home Minister Asaduzzaman Khan Kamal announced the handing over of the list during a news briefing following a meeting with his counterpart Lt. Gen. Kyaw Swe.
“The Myanmar side has cordially accepted the list; they have planned a three-stage process: taking them [Rohingya] back, ensuring their livelihood and then awarding them with nationality,” Kamal said.
Meanwhile, another meeting between two countries would take place in Myanmar on Feb. 20 to discus the return of 6,000 Rohingya who remain stranded in the borders between the two countries.
Kamal told reporters after a three-and-a-half-hour meeting that 1.1 million Myanmar citizens (Rohingya) are now in Bangladesh.
The Myanmar delegation came to Dhaka on Thursday to attend the meeting.
The Rohingya, described by the UN as the world’s most persecuted people, have faced heightened fears of attack since dozens were killed in communal violence in 2012.
More than 650,000 refugees, mostly children and women, have fled Myanmar since Aug. 25, 2017 when Myanmar forces launched a crackdown on the minority Muslim community, according to the UN.
At least 9,000 Rohingya were killed in Rakhine state from Aug. 25 to Sept. 24, according to Doctors Without Borders.
In a report published on Dec. 12, 2017, the global humanitarian organization said the deaths of 71.7 percent or 6,700 Rohingya were caused by violence. They include 730 children below the age of 5.
The UN has documented mass gang rapes, killings — including of infants and young children — brutal beatings and disappearances committed by security personnel. In a report, UN investigators said such violations may have constituted crimes against humanity.