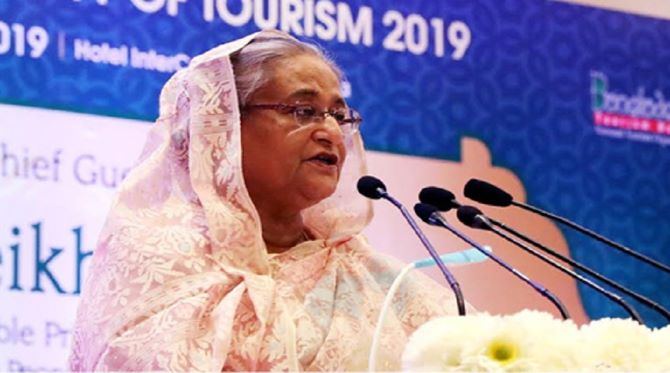 Shehab Sumon: To attract tourists from these countries, Dhaka has proposed to build a special tourist zone at the world’s longest sea beach in Cox’s Bazar.
Prime Minister Sheikh Hasina announced the proposal during the inaugural session of a two-day festival called “Dhaka the OIC City of Tourism 2019” on Thursday.
The program was attended by tourism ministers from Sierra Leone and Gambia and all other OIC states’ ambassadors in Dhaka.
Dhaka was chosen as the “city of tourism” for 2019 during the 10th Islamic conference of tourism ministers, held in Dhaka between Feb. 5-7, 2018.
Bangladesh has many historic Islamic sites, such as ancient mosques, holy shrines of different preachers of Islam, and great architectural structures of the Mughals.

The country boasts special natural spots including the beach at Cox’s Bazar, the world’s only mangrove forest Sundarbans, and the serene beauty of Chottogram Hill Tracts.
While addressing the OIC delegates, Hasina talked about the potential of increasing tourism in the country.
“The value of the Islamic tourism market will increase to $243 billion by 2021, with an annual 8.3 percent growth. We’ll have to take great efforts and prepare a roadmap aimed at promoting Islamic tourism as a global business brand, which will attract tourists further,” Hasina said.
“There’s an urgent need to galvanize our tourism sector. Islamic tourism is the best possible area where we have the opportunity to work together,” she said.
To boost tourism from OIC citizens, Hasina proposed to “promote intra-OIC tourist flows through easing visas,” and “for investment promotion, branding and standardization and capacity building.”
She said that her country is willing to “designate and develop a particular place on the Cox’s Bazar sea beach for their tourists.”
“Since we want to develop our tourism sector internationally, we can also designate and develop a separate place for the tourists from the western world,” she added.
“Bangladesh has a strong tradition of halal foods. Moreover, we have so many Islamic heritage sites across the country which will attract the Muslim tourists,” said Dr. Bhubon Chandra Biswas, CEO of Bangladesh’s Tourism Board.
“We will work on preparing a special tourist zone for OIC nationals on Cox’s Bazar. Bangladesh will organize a series of tourism fairs in the OIC states,” Biswas added.
Shamser Mobin Chowdhury, former ambassador and foreign secretary of Bangladesh, suggested that the country needs to build more infrastructure to attract foreign tourists.
“Around 80 percent of our tourists are domestic. We need to introduce e-visa and port-entry arrival systems for OIC nationals to promote intra-OIC tourism,” Chowdhury said.
“The government should support the private sector like the Maldives and Sri Lanka did. The government should facilitate and coordinate the policies along with the private sector operators,” Chowdhury added.