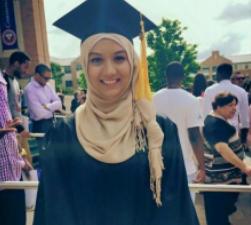 Walking on the graduation stage is one of life’s happiest moments. It should have been Aminah’s happy moment on Friday.
“We watched her walk, and I shouted at the top of my lungs for her,” said cousin Shahina Ahmed.
On Friday, Aminah Jennifa Ahmed got degrees in biology and business from the University of Texas at Arlington. Family members and friends say she was smart and caring, but that day, she was also hurting.
“There was zero symptoms, zero signs, zero everything [before graduation day,]” said her father Shamsul Ahmed. “She said she had a headache and throwing up, and that’s it.”
Minutes after she walked that stage and before she was taking grad pictures, she didn’t feel right. She told friends and family that her head hurt. She told her father she was very stressed from school. Aminah threw up on campus, and later in the car on the ride home.
Her father told News 8 Aminah wanted to take a brief nap on the couch. Shamsul would check on her periodically, but said after about 8 p.m. something wasn’t right. She had trouble breathing.
“You hold on to that faith and you know you’re OK with that, but then, at the same time, your world is just kind of tumbling,” Shahina Ahmed said.
Doctors haven’t confirmed what happened, but they believe Aminah suffered a brain aneurysm. It often comes unnoticed, but severe headaches and blurred vision can often come with an aneurysm.
Aminah was very active at local mosques and with a lot of student activities. Friends say her caring heart also led her to do lot of charity work.
One project she had started just recently would pay for eye surgeries for the poorest children in South Asia, especially her home country of Bangladesh. Since her death, her family has renamed the project “Aminah Sees.”
On a Go Fund Me page her family set up, more than $20,000 was raised in her honor in a two-day span.
“Nothing comes close to her,” her father said.
This community of faith mourns a very caring, ambitious woman. She was taken on a day that should’ve been her happy moment.