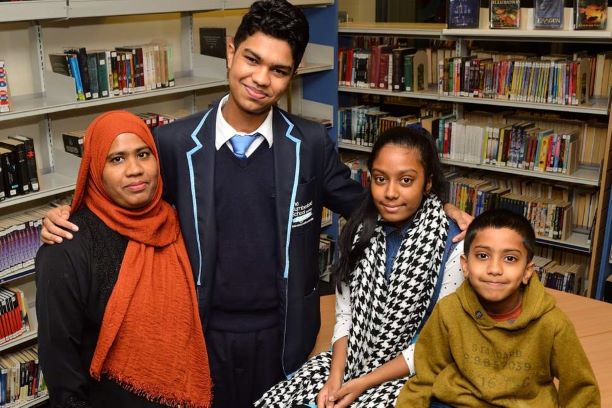 A teenager born in Bangladesh who lives in an East End council flat will follow in the footsteps of Princes William and Harry after winning a place at Eton. Maheraj Ahmed, 15, will take his place in the hallowed halls of Britain’s most famous school on a £76,000 scholarship next September.

Maheraj, who goes to Cumberland School in Plaistow, will join the sixth form at Eton to study for A-levels in history, chemistry, biology and physics next September, after coming through a three-day assessment at the Berkshire school which included three entrance exams, seven interviews and a public debate.

He shares a three-bedroom flat in Barkingside with his father Sharif Uddin, mother Rani Begum, and a younger sister and brother. He said: “People would not think that I would have much in common with the boys at Eton but I did not find them stuck up at all, they just want to do well in life, that is all I want.

“The only difference is my motivation is maybe stronger than theirs. My family and I have had a hard life. Going to Eton will give me a chance to make our lives better.”
The family left Bangladesh in 2007 to escape civil unrest. Maheraj said: “East London is a tough place to grow up. There are lots of problems here. My mum will not let me go out after dark because of the social problems we have here. We have had to move around a lot, to different parts of London, sometimes a long way from my school, which means a lot of ­travelling.
He added: “I do feel very grateful to this country for allowing my family and I to come here. I want to repay that by becoming a hard-working member of society who can contribute in a positive way. I want to study medicine, hopefully at Oxford or Cambridge, and become a heart surgeon. I want to give something back.”

Maheraj, whose parents do not have jobs, was mentored throughout the application process by his head­teacher, Simon Elliott. Maheraj said: “The second I knew I had been accepted by Eton I knew my life had changed beyond all recognition. What Mr Elliott and my school have done can never really be repaid.

“I can’t imagine any school in the East End or any state school where you have your own mentor, who works with you every day, who pushes you and is willing you to succeed. Every time I feel tired, I think of how much Mr Elliott has helped me. I did not want to let him down.”

Mr Elliott said: “Maheraj has set the bar for others to follow. He teaches them that these kinds of opportunities are not out of their reach.” -Evening Standard