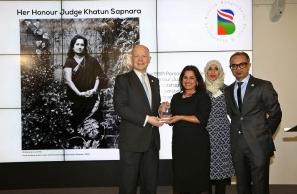 The British Bangladeshi Power & Inspiration 2015 celebrated the success of 100 British Bangladeshi’s on the 27th January at an exclusive launch event in Canary Wharf, London. The list highlights talent across 20 categories and showcases the contributions and achievements of 100 British Bangladeshis to every walk of British life.
The 2015 list and the BBPI Person of the Year were announced by the Chief Guest, the Rt. Hon. William Hague MP, the former British Foreign Secretary. Other guests at the exclusive event included the Rt. Hon. Dame Tessa Jowell, Ann Main MP, Alan Johnson MP and senior representatives of other political parties and invitees from the 2015 list.
The first ever BBPI ‘Person of the Year’ was awarded to Her
Honour Judge Khatun Sapnara for her outstanding achievement as the first person of British Bangladeshi origin in a senior judicial position.
The Chief Guest, the Rt. Hon. William Hague MP, said of the launch:
“I am delighted to be here recognising and celebrating the contribution of the British Bangladeshi community to every walk of British life including business, technology and public life. British Bangladeshis are very much part of the tapestry that makes up the British success story”.
Rt. Hon. Dame Tessa Jowell said of BBPI:
“I am incredibly proud to be a friend and staunch supporter of BBPI and all that it has achieved. All credit to Abdal and Ayesha for taking on this important project which highlights role models and inspirations in the British Bangladeshi community at a time when we need to do more to celebrate and recognise that our diversity in London and the UK is what makes us strong as a nation.”
Ayesha Qureshi and Abdal Ullah, Founders of The British Bangladeshi Power & Inspiration said of the launch:
“We are delighted that BBPI has gone from strength to strength. We are especially proud that this year the new title of BBPI Person of the Year was awarded to Judge Khatun Sapnara. She is not only an inspiration to young British Bangladeshis, but it was because we wanted to celebrate people like Judge Sapnara that we started BBPI. Congratulations to her and all 100 BBPI names on the 2015 list.”
Iqbal Wahhab OBE, Chair of the BBPI Judging Panel, said of the launch:
“BBPI is an incredible project of which I am very proud to be a part of. I am particularly delighted to see a female winner of the new Person of the Year, but also that so many incredible British Bangladeshi women are recognised and celebrated on this year’s list. We need to see more women from our communities build careers, succeed and act as role models for more to follow suit.”
Syed Nahas Pasha, of the 2015 BBPI Judging Panel, said of the event:
“BBPI has become the highlight event of the British Bangladeshi community and does us proud in providing incredible role models for the next generation of leaders and influencers from our community. The judging gets harder every year with so much boundless talent in the community. We are delighted to be finding so much undiscovered talent.”