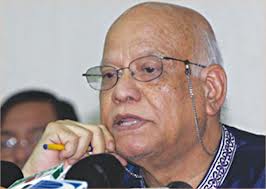 Finance Minister AMA Muhith has said that the country will attain major progress in fighting corruption within the next 10 years as the government has taken various steps to combat the social menace.
“The number of graft cases, filed by the Anti-Corruption Commission (ACC), is reducing gradually. But, the accused are being convicted in about 70 percent of these cases,” he said.
The finance minister was addressing at an award distribution ceremony at the National Theater Auditorium in the city.
The national anti-graft agency awarded the members of the best anti-corruption committees of Dhaka and Mymensingh divisions, marking the Anti-Corruption Week-2018.
Muhith said the government is working sincerely to curb corruption from all levels of the society.
“The government is giving enough salaries to the government employees,” Muhith said, speaking as the chief guest. “We have formed upazila anti-corruption committees across the country. But, our efforts for checking graft will take time to root out the corruption from the society.”
The finance minister sought another five-year term for the Awami League government to continue the ongoing development activities of the country and alleviate poverty.
He said Bangladesh has achieved a remarkable success in alleviating poverty under the leadership of Prime Minister as well.