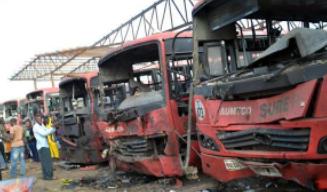 A bombing at a bus station packed with morning commuters on the outskirts of Nigeria’s capital killed 71 people and wounded 124 on Monday, with the president blaming the attack on Boko Haram Islamists.
The explosion rocked the Nyanya station south of Abuja at 6:45 a.m. (0545 GMT), leaving body parts scattered across the terminal and destroying dozens of vehicles.
It was the deadliest single attack ever to hit Nigeria’s Federal Capital Territory, which includes Abuja and surrounding areas.
Officials had earlier said that two separate blasts ripped through the compound, but later said the damage may have been caused by just one bomb.
The explosion “emanated from a vehicle” parked within the station, said Charles Otegbade, head of search and rescue at the National Emergency Management Agency (NEMA).
National police spokesman Frank Mba put the toll at 71 dead and 124 injured, with the wounded being treated at area hospitals.
Visiting the site, President Goodluck Jonathan vowed that Nigeria would overcome the brutal insurgency being waged by Boko Haram, blamed for killing thousands across the north and center of the country since 2009.
“The issue of Boko Haram is quite an ugly history within this period of our own development,” Jonathan said. “But we will get over it … The issue of Boko Haram is temporary.”
The Islamists have carried out several previous attacks in and around the capital, including a 2011 car bombing at the United Nations headquarters in the city that killed at least 26 people.