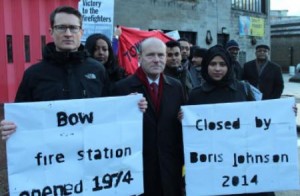 To mark the final chapter of the fight against Boris Johnson’s decision to close Bow fire station Labour councillors and residents held a protest as the station closed its doors forever earlier this month.
Boris Johnson ordered the station closed along with nine other London fire stations in order to fund a politically motivated cut of one pence a day to council tax bills. He took the step even though official figures suggest that the closure will increase first engine response times which will jump by over three minutes to almost 7 ½ minutes. Which is especially dangerous in a densely populated area like Tower Hamlets with a many high rise buildings.
Nobody in our community supports his choice to close our fire station and we weren’t going to let it go quietly. The sad fact is that Boris Johnson’s decision to put his own politics before public safety will put lives at risk.