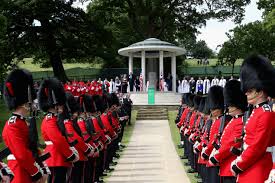 Britain’s Queen Elizabeth led celebrations on Monday to mark 800 years since the sealing of the Magna Carta, one of the world’s most significant historical documents and credited with paving the way for modern freedoms and human rights.
On June 15, 1215, in fields by the banks of the River Thames at Runnymede to the west of London, England’s King John agreed to the demands of his rebelling barons and accepted the Magna Carta, Latin for “Great Charter”, which for the first time placed the monarch under the rule of law.
In the centuries since, it has taken on huge global significance, becoming the basis for the U.S. Bill of Rights, the U.S. Declaration of Independence and the Universal Declaration of Human Rights. Three of its 63 clauses still remain on Britain’s statute book.
“What happened in these meadows eight centuries ago is as relevant today as it was then. And that relevance extends far beyond Britain,” British Prime Minister David Cameron said.
He said the document had changed the world, inspiring people from the founding fathers of the United States and Indian independence leader Mahatma Gandhi to Nelson Mandela in South Africa.
“Its remaining copies may be faded, but its principles shine as brightly as ever,” Cameron told the ceremony attended by the queen, other royals and global figures including U.S. Attorney General Loretta Lynch.
Magna Carta came into being during a period of great political upheaval in England with conflict between King John, his nobles and the English church.
It was essentially a peace deal to address the problems of the day and was annulled by the pope shortly afterwards. But updated versions, which included two original clauses regarded as pivotal in establishing the rule of law, were re-released regularly by or on behalf of succeeding monarchs.
The clauses read: “No free man shall be seized or imprisoned, or stripped of his rights or possessions, or outlawed or exiled, or deprived of his standing in any way, nor will we proceed with force against him, or send others to do so, except by the lawful judgment of his equals or by the law of the land.
“To no one will we sell, to no one deny or delay right or justice.”