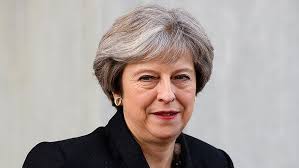 Prime Minister Theresa May told the British people Friday that they have to face “hard facts” about Brexit, warning that the UK will have less access to European Union markets once it leaves the bloc.
But May also said she thinks a mutually beneficial future relationship is possible, and she urged EU leaders to work with her to deliver a “bold and comprehensive economic partnership.”
In a speech aimed at answering critics who have accused the UK government of failing to grasp the tough realities of leaving the EU, May said Britain wanted “the broadest and deepest possible agreement — covering more sectors and cooperating more fully than any free trade agreement anywhere in the world today.”
She said Britain’s goal post-Brexit is “a bold and comprehensive economic partnership with our neighbors in the EU, and reaching out beyond to foster trade agreements with nations across the globe.”
However, the other EU members might interpret Britain’s aim as attempting to cherry-pick benefits of EU membership, something the EU has repeatedly warned May’s government it cannot do.
The UK is due to leave the EU in March 2019, but the two sides have yet to negotiate new arrangements for trade, security, aviation and a host of other fields.
EU leaders have warned that May’s insistence on leaving the EU’s single market and customs union makes the continued close ties she is seeking impossible.
In a speech aimed both at the EU and at a UK that remains divided over whether Brexit is a good idea, May acknowledged that British access to EU markets “will be less than it is now” after Brexit.
“This is a negotiation, and neither of us can have exactly what we want,” she told an audience at the Mansion House in London.
But she signaled that Britain is willing to make major compromises to secure what she called the world’s most ambitious free trade deal.
“U.K .and EU regulatory standards will remain substantially similar in the future” to ensure there is no need for tariffs and other obstacles for the free movement of goods, May said.
She said “bold and creative thinking” could lead to solutions for trade in services and other areas.
May also mentioned that Britain wants to remain a member of some EU agencies, including those governing medicines and aviation — and is willing to pay and to play by the agencies’ rules.
“If this is cherry-picking, then every trade relationship is cherry-picking,” the British leader said, noting that all trade deals are unique.
Addressing the EU, May said: “We know what we want. We understand your principles. We have a shared interest in getting this right.
“Let’s get on with it.”