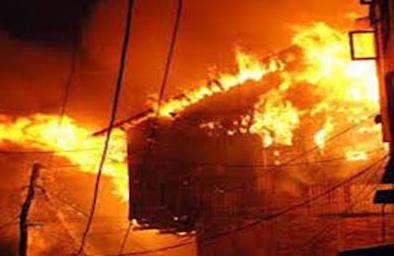 Twin blazes in northern California have combined to form the largest inferno in the state’s history.
The fires, collectively known as the Mendocino Complex Fire, began roaring last month and have been fueled by low humidity and high winds as they consume more than 280,000 acres in 11 days.
The California Department of Forestry and Fire Protection (Cal Fire) announced Monday night the infamous distinction as firefighters work relentlessly to bring it under control.
“We broke the record,” Scott McLean, a deputy chief with Cal Fire said, according to the Los Angeles Times. “That’s one of those records you don’t want to see.”
It is already the size of Los Angeles and is still growing.
The fire is just 30 percent contained, and officials are not expecting to have the fire under full containment until the middle of August.
About 14,000 firefighters are battling over 20 blazes in the state. At least nine people have died.
President Donald Trump freed up federal resources on Saturday to help combat the blaze, but has since taken to Twitter to repeatedly bombast state officials — who are his political rivals — as they seek to deal with the ongoing crisis.
Trump has blamed the fires on California’s “bad environmental laws which aren’t allowing massive amounts of readily available water to be properly utilized,” and said the water is “being diverted into the Pacific Ocean.”
But Trump’s tweets have perplexed experts who see no basis in reality for them.
“The only water that reaches the ocean these days is what’s left AFTER the massive diversions OUT of our rivers for cities and farms. And there’s no shortage of fire-fighting water. Nuts.” Peter Gleick, co-founder of the Pacific Institute wrote on Twitter.
A new fire that ignited south of Los Angeles on Monday has quickly spread in the Cleveland National Forest and has burned over 4,000 acres with zero percent containment.