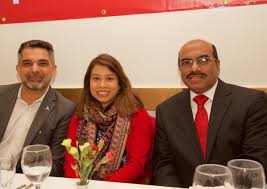 Labour activists gathered in Kensal Rise for an afternoon of flowers, curry and Bangladeshi television crews to celebrate MP Tulip Siddiq’s election victory and the upcoming birth of her baby girl.
The residents joined with Cllr Muhammed Butt, leader of Brent Council, at Ruhit’s restaurant in Sidmouth Parade to celebrate a momentous year for the Labour MP, who was elected by Hampstead and Kilburn in May last year and is expecting a baby in April.
The 33-year-old, whose aunt is the current Prime Minister of Bangladesh, is also the granddaughter of Bangladesh’s founding father and is frequently attended by camera crews feeding public appetite for news of her family.
Thanking more than 40 Labour activists who helped propel her to a 1,138 vote majority last year, Ms Siddiq told her supporters: “We had a bad election and we didn’t get Miliband in as we wanted but we did keep Hampstead and Kilburn and that was a great victory.
“Well done to all of the people of Brondebsury Park who helped the campaign.”
Taraul Islam, who came to England from Bangladesh to set up Ruhit’s restaurant 16 years ago, said: “Tulip’s family is very important to the history of Bangladesh, and I wanted to thank the Labour party for what they have done for my family by making the food for today.
“I am very excited that Tulip is expecting a baby- hopefully one day – if she doesn’t first- her baby will become Prime Minister of the UK.”