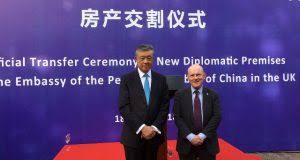 Mayor John Biggs has met with the Chinese Ambassador at a special ceremony to mark the fact that the Embassy of the People’s Republic of China will be moving to Tower Hamlets.
The Embassy will be situated on the site of the former Royal Mint at Tower Hill in a location overlooking the iconic Tower of London. It has been purchased by the Chinese Government and after an extensive refurbishment, the diplomatic mission of the People’s Republic of China, one of the biggest in the world, will operate on the site.
Mayor John Biggs said, “I am pleased that the Chinese Embassy has chosen to make their new home in the historic Royal Mint building. The fact they are moving to Tower Hamlets is a vote of confidence in the Borough, and reflects the fact we are an open and dynamic place to live and work. I was delighted to attend the ceremony to announce this and look forward to working closely with the Embassy when it opens its doors”
Chinese Ambassador His Excellency Ambassador Liu Xiaoming  said, “An embassy is the face of a country. Our current premises in Portland Place has gone through many renovations in order to meet the growing needs of our diplomatic mission. However, the new era is calling for a new premises consistent with China’s current role and influence in the world.
I am confident that after the renovation, the new premises of the Chinese Embassy will become a new landmark in London and a new face of China in the new era. I hope our two countries will work together to write a new chapter for China-UK “Golden Era” and make new contribution to the building of a community with a shared future for mankind.
I wish to thank London Borough of Tower Hamlets for your support in planning.”