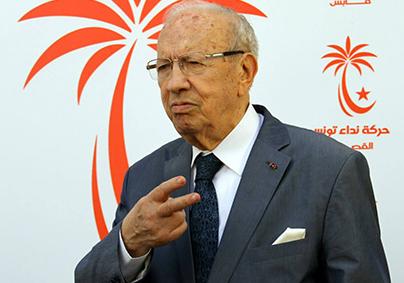 Initial indications of Tunisia’s presidential runoff election show that Beji Caid Essebsi, the head of the Nidaa Tounes movement, had won Sunday’s runoff poll, Essebsi’s campaign team said.
Essebsi, for his part, told state TV that he waited for final election results, calling on his rival, incumbent Interim President Moncef Marzouki, to cooperate with him, saying the future made it necessary for both of them to work together.
A victory for Essebsi, 88, would see the return of a former Ben Ali official to the presidency just four years after the autocrat fled. Essebsi’s party already leads the parliament after earlier this year defeating the Ennahda that had won Tunisia’s first legislative election in 2011.
With a new progressive constitution and a string of elections successfully completed, Tunisia is hailed as an example of democratic change in a region that is struggling to cope with the aftermath of the 2011 Arab Spring revolts.
“I dedicate my victory to the martyrs of Tunisia. I thank Marzouki, and now we should work together without excluding anyone,” Essebsi, a one-time parliament speaker under Ben Ali, told local television.
His campaign manager said “initial indications” showed Essebsi had won, without giving any details, as hundreds of supporters chanted “Beji President!” and waved Tunisia’s red and white national flag.
However, the rival campaign manager for Marzouki, Adnen Monsar, dismissed the victory claims, saying it was a very close call. “Nothing is confirmed so far,” he told reporters.
Marzouki’s campaign also referred to what it described as a “growing” number of irregularities during the last three hours of the runoff vote, which came to an end at 6:00pm.
An hour and half before polls were scheduled to close, nearly 47 percent of registered voters had cast their ballots, electoral commission member Nabil Bafoun told The Anadolu Agency.
Some election observers, meanwhile, said voter turnout was moderate in general, citing a noticeably low turnout among youths.