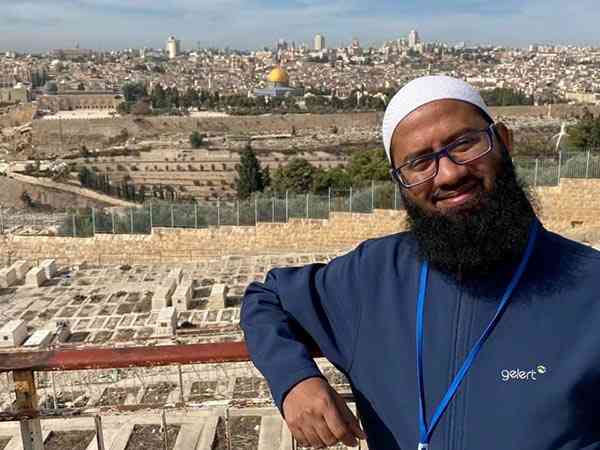 Abu Sayed Ansarey is a popular young Islamic scholar in Britain. Those who love Islam enjoy his programs on television! The young scholar was recently contracted by the deadly coronavirus! After going through these hard and terrible days of life, by the great grace of the Creator, he overcame the hardships and told us his story! Recently, when the story written by Abu Sayed Ansarey was published on our Bengali news portal, it became very popular. Many people requested us to publish it in English! This favorite story of many readers translated by Enam Chowdhury, editor of The Sunrise Today, and edited by Shayema Nazmin Wakil.
Abu Sayed Ansarey: On April 1, 2020, there was a sudden onset of fever with severe tremors. There was no way I could stand. Then the sore throat and constant coughing started. Acute pain started in different muscles of the body. It was as if someone was hitting me with a hammer and stabbing me in the throat. I thought this was the inevitable arrival of coronavirus! I had a cough a few days ago, I got better and then the coronavirus fever started again. I started calling on Allah. On Friday, April 3, my mother-in-law, who lived very close to my home, was struck by corona and moved to her final destination. My wife was really saddened, shocked and melancholic by her death. These days she has rushed to the hospital alone. At first my mum in law had a lot of chest pain. The doctors thought she had a heart problem. Earlier, however, she had two heart attacks. But Covid 19 was found in the next test.
West Middlesex Hospital did not allow anyone in the family to be with her at the time of her death. She was isolated after coronavirus was identified. Needless to say, she died alone. May Allah grant her Jannatul Firdaus (Paradise). Ameen.

That Friday night my symptoms got worse. Gradually I lost my sense of smell. I remember not even smelling the very fragrant perfume from my brother-in-law Walid from Kuwait. I said to Allah in my heart, ‘O Allah, if you give me the fragrance of Paradise instead of the fragrance of the earth, I am happy’!
One day I called the National Health Service, my wife also spoke to them, they sent an ambulance. But I decided not to go to the hospital.
Meanwhile, Dr. Watson and Dr. Banerjee, doctors of my surgery called me over and over again to see how I was doing. My condition was deteriorating further, now severe chest pain had started. It was as if someone had put a big cold stone on my chest. Shortness of breath also began.
Dr. Banerjee was very kind and compassionate woman. She made a video call and said, ‘Mr Ansarey what can I do for you? You tell me. Would you like to go to the hospital? ‘
My family was adamant for me not to go to the hospital. Because the death of my mother-in-law alone had already caused great pain to everyone. I asked Dr. Banerjee, ‘Do you have any other options?’ She said, ‘We have got very limited options, but, we can send you to a community hub clinic.’ I took that option.
I went to the Community Hub Clinic on 22nd April 2020. I felt like I was an alien, just coming to Earth from an alien planet. Upon entering the clinic, a nurse from the next room asked me to take off my gloves clean my hands with hand sanitizer and wear a mask. I said, I have a mask. I sat alone in the room with severe pain in the chest. My body was very weak by then.
It was as if I had fallen. Then a call came from that room, I entered there. A little later a Spanish doctor came, first she greeted mefrom a distance of 2 meters. The doctor wearing PPE came closer later. After examining me, she said, “You have a lung infection.” She talked about monitoring breathing difficulties. She advised me to go to hospital if it increased. However, she also instilled some fear. As she prescribed antibiotic medication she said, “Take two pills today, but I can’t tell you what will happen after 24 hours.” I returned home, relying on Allah.
I have been in isolation for a long time. I tried to relieve shortness of breath by opening the windows of my room. I read the prayers of Qur’an and Hadith. I sought forgiveness from Allah the Almighty. Blessings were also asked on a British television station where I regularly performed. Every day it seemed as if I had come very close to the grave. Dark, dark grave. My father prayed over the phone from London with all the brothers and sisters. My helpless wife prayed. The children prayed for me too.
My little daughter Nusaibahwanted to come closerto me; she would tell her mother, “I don’t see the virus in my father” and would hug me from a distance. As a father, my chest would burst with great sadness. I could not hug the children for many days.

My brother Mushfiqul Fazal Ansarey, Assistant Press Secretary to the former Prime Minister of Bangladesh, who is currently working as a correspondent for Just News BD at the White House, who arranged a conference phone call with Dr. Lulu, a famous doctor in New York. Following his advice, I did bed exercises in the prone position. That was really helpful. In fact, the virus wants to injure the lungs. It wants to make the body very weak and inactive. In this case some exercises are required, such as; pranayama-breathing exercises. I kept doing these.
At that time, the number of mortalities inBritain were increasing day by day. Undeterred, I started taking prophetic and natural medicine, such as black cumin, black cumin paste, its oil, honey, mustard oil, Zamzam water, Ajwah dates, lemon juice and steam therapy. Then I would mix salt and turmeric powder and gargle with hot water. I would do this regularly. Alhamdulillah, I started to get a lot of benefit.
The fever and cough did not last long. However, the pain in my body was severe also, difficulty in breathing. I would sit by the window and try to connect myself with nature. The number of doves in the UK arenot many. But at that time a dove was twitting to our window all the time. It’s twitting reminded me of the distant days of my childhood- the dove on the top of the hill next to the Shahi Eidgah. It’s singing was really charming, especially when I had a fever. At that time, my mother would just pour water on my head. Then the sound of pouring water and the songs of the dove were simply amazing! Since we have a house on the bank of the river Thames, we are surrounded by different birds.
It was springtime in the UK. Nature had given a new look. My daughter used to pick beautiful flowers for me from my garden and put them on the dining table. I think girls are more attached to the flowers than boys!I have three sons, Umar, Uzair and Ubai. Every time someone would fill the water flask with hot water. At that time hot water was my food. I couldn’t taste the food I ate. The doctor said to drink a lot of water.
At 8 o’clock in theevening, the people of Britain would come to the windows of their houses and clap their hands to show their appreciation for the NHS staff working hard in the hospitals. My daughter enjoyed it very much. Some of my neighbourswould make noise with saucepans and spoons … then I would leave the window for my daughterNusaibah. She used to draw pictures to keep me happy. Each of her pictures had a rainbow. Huge rainbows. Rainbows of various colours. It seemed that one day I would get better, like a rainbow in the sky after a heavyrain, inshallah (If God wills). These pictures showed me the light of hope.
I never told my mother, who lives in Bangladesh currentlythat I contracted coronavirus. But I always asked for her blessings. She used to say ‘Inshallah you will get better soon.’ Alhamdulillah (all praise and thanks be to God) finally one day my oxygen level came under control. However, it took a long time to get back the sense of smell.
The doctor gave me antibiotics twice in a row. The side effects were a little more. Sometimes I felt like I had no arms or legs. Then slowly everything started working as usual. I have never been disappointed. The life of a believer is between hope and fear! I was afraid to appear before the Lord if I go on this journey leaving the friendship of the dove and Thames! And the hope was that by the will of Allaah I might get better as a rainbow, just like the rainbow which Nusaibah drew or similar to a rainbow in the sky!