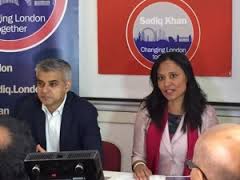 MP for Bethnal Green and Bow Rushanara Ali MP has urged everyone to register their names to take part in the mayoral candidate nomination for forthcoming London mayor election.
She also said that if someone registers his or her name, they can also vote for Labour leader election.
Rushanara Ali said this in a press conference organised in support of Sadiq Khan.
The press conference was held in Bethnal Green in East London on 30th July.
While justifying her support for Sadiq Khan, Rushanara Ali MP said that Sadiq Khan is the best person to serve the Londoners. He is the first and only Muslim cabinet minister who has also served as Shadow Justice Secretary. Sadiq Khan is coming from a very general family and reached to this level using his intelligence and experiences. He bears all the qualities required to serve as a mayor.  He has devised his policies based on improvement of training and employment, housing, public transport, London living wages and police for Londoners.
Rushanara also said that to vote for Sadiq Khan, one does not need to be a member of Labour Party.  Anyone can text ‘Labour’ to 78555 to register their name to vote for mayoral candidacy.  This will only require a £3.00 administration fee.
At the Press conference Sadiq Khan said that that he was absolutely delighted to have the support of Rushanara and of so many of his other London Labour colleagues, representing a broad range of opinion from right across the Labour Party and London.
He said, “Together, we can tackle the big issues facing this city and change London for the better.”