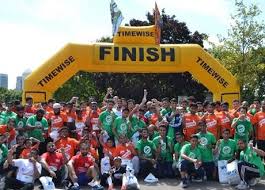 On Saturday 1st of August 2015, Mile End Park (London) hosted one of the largest gatherings for the deaf community in London – The Deaf Run 2015.  Basking in the glorious sunshine of a summer’s day on a fun-filled action packed bonanza – hundreds from all walks of the community, attended and partook in a two mile run to raising over £20,000 for Deaf Friendly Services.
The race was the highlight of the day, which was enthusiastically opened by Emdad Rahman (MBE), with over 500 runners representing several unique charitable causes, pitting young against old, hearing against non-hearing, all in a ‘Deaf Friendly’ environment.  Mohammed Akhlakul Ambea was victorious in the over 16’s category, upon receiving his award from the Mayor of Tower Hamlets John Biggs he stated, “It was a fantastic day which brought together families, friends and the community.”
The many thousands that attended, were able to participate in exciting activities which catered for all ages including fun inflatable attractions, Al Isharah’s Super-Spicy Hot Wings Challenge, Charity Tug-of-War Tournament and a fantastic award ceremony to close the signature event.
The event was organised by Al Isharah, a local education based deaf charity working to make services accessible for the deaf community.