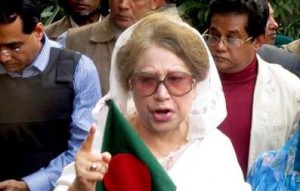 A libel case was filed on Monday against BNP chairperson Khaleda Zia for terming late Ziaur Rahman as the first president of the country.
Rawshan Ara Shikdar, an advocate, filed the case in the Chief Metropolitan Magistrate Court of Dhaka in the morning on behalf of AB Siddiqui, President of Bangladesh Jananetri Parishad.
The case was filed with the court of magistrate Shamsul Arefin and a hearing on the acceptance of the case will be held at 11:00am.
BNP chairperson Khaleda Zia claimed Ziaur Rahaman as the first president of Bangladesh in a program of Jatiyatabadi Muktijoddha Dal on March 27, marking the Independence Day.