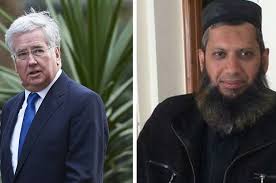 The Defence Secretary Michal Fallon, who called Shaykh Suliman Gani an ISIS supporter during a radio interview, has said sorry for the “inadvertent error” after the imam launched legal action against him.
Pressure is now mounting on David Cameron to follow suit after he also accused Mr Gani of backing ISIS, although Cameron’s statement was made in parliament where he is protected by privilege.
The imam has made it clear on many occasions that he opposes ISIS.
Last month Cameron said about Sadiq Khan: “Suliman Gani, the Honourable Member for Tooting has appeared on a platform with him nine times – this man supports IS. Anyone can make a mistake about who they appear on a platform with, we’re not always responsible for what our political opponents say, but if you do it time after time after time it is right to question your judgement.”
Mr Fallon made a similar claim on Radio 4, but his spokesman said he had been repeating comments made by Andrew Neil during a TV debate.
The spokesman told the Mirror: “Michael made clear he was quoting a claim by Andrew Neil on a BBC Mayoral debate programme. He was unaware of the clarification and apology that the BBC had issued on Neil’s claim.
“Had he been aware, he would not of course have quoted him and as soon he became aware he put the record straight. He naturally apologises for this inadvertent error.”
Mr Gani, a father of six, says he fears for his family’s safety after the accusations made by the Prime Minister and the Defence Secretary.
He says he has been subjected to verbal abuse by strangers in the street, who called him a “terrorist supporter.”