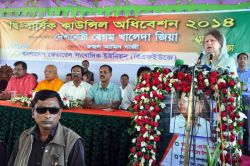 BNP chairperson Begum Khaleda Zia has said, Bangladesh does not exist today. It has become only a title now as there is no democracy in the country.
She made the call while addressing the biannual conference of a faction of Bangladesh Federal Union of Journalists (BFUJ) at the National Press Club in the capital on Saturday afternoon.
Urging the journalists to write the “original history of our independence war,” BNP chairperson Khaleda Zia has said the new generation should be learnt about the history of birth of the country. She said, “Write original history of the independence and make the future generation aware about it.”
Regarding the role of the Awami League during the independence war, she said: ““Awami freedom fighters are refugee. They crossed Indian border at the time of independence war.
Awami League should count the number of war criminals in their own team. Former home minister should be in jail as he did not have the right to be in power as he was not freedom fighter,” she added.
Criticising the Awami League, she said:  “Awami League  is not in support of independence war. They are liar and tyrant.”
She added, “We were much more tolerant during our governance. We did not file false cases against their leaders; we did not make them disappear.”
She also claimed that the people have understood that the ruling party was trying to make them confused by taking about the independence war all the time.