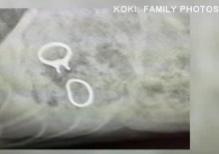 A Tulsa family recently learned that their dog has expensive taste in treats. The lab pup ate her owner’s engagement ring and wedding band, worth $23,000.
“I saw the dogs near the coffee table and remembered that I’d left my wedding rings sitting on the table last night,” Stephanie Lamb, the dog’s owner, said.
Lamb’s two dogs, Tahoe and Sierra, were apparently looking for a snack.
“By the time I ran over there, two were gone, and she was going for the other two,” Lamb said.
She didn’t see which dog ate the rings but said she had a hunch.
“I knew that it was Sierra because she’s just a little bit of a troublemaker. She’s kind of the instigator,” Lamb said.
She was right.
Dr. Rodney Robards of Southern Hills Veterinary Hospital had to surgically remove the rings from Sierra’s stomach. He said waiting for them to come out of Sierra would’ve been a risky option because of the damage that could’ve been done to her intestines.
He was able to retrieve both the engagement ring and wedding band, but they were in bad shape.
“She eats more than just rings I’m afraid. Once I got inside the stomach, there were some rocks in there, there were, I can’t tell if it was sticks or bones,” Robards said.
Sierra went home with a clean stomach and Lamb went home with her rings.
Her son, Brody, is relieved.
“What did you think that meant?” a reporter asked.
“That my mom and dad weren’t married anymore,” Brody answered. -CNN