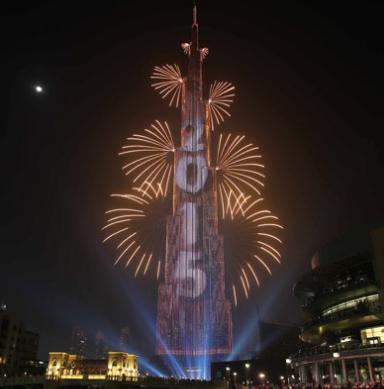 Enter 2015, and there was a rush of joy in Dubai with the night sky lit up in a kaleidoscope of colours, the world’s tallest building once again at the centre of celebrations. All eyes turned on the city with spectacular fireworks at different venues setting the stage to welcome the year in style.
Counting down to midnight, millions of people watched the show as the 828-metre Burj Khalifa turned into an illuminated screen. Laser beams lit up the entire Downtown Dubai neighbourhood in a spell-binding hue with The Dubai Fountain dancing to rhythms of world music.
“With the festive event, we are underlining the positivity of Dubai, a city that brings hope, cheer and optimism to people in the region and across the world,” said Ahmad Al Matrooshi, Managing Director of Emaar Properties.
The magnificent fireworks atop the Burj Khalifa served as a perfect backdrop for the celebration which used some of the world’s most advanced pyrotechnics and LED technology.
The New Year’s Eve Gala, by global developer Emaar Properties, was split over a breath-taking six part firework, laser and light show that swept through Downtown Dubai, while the LED screen wrapped around Burj Khalifa created the world’s brightest illuminations to date.
Setting yet another Guinness World Record — the LED projections displayed full colour animated video images. The visual display, a rich tribute to Dubai, its leadership, and the UAE’s 43 years of impressive achievements on the Burj Khalifa LED screen, created a magical and unforgettable experience for spectators before and after the much-awaited countdown.
“The Downtown Dubai New Year’s Eve Gala has defined its credentials in a short span of time as the world’s most-watched New Year’s Eve spectacle surpassing the visitor turnout at celebrations in New York, Sydney and London. With visitors from all over the world arriving to join in the festivities, the event has become a defining spectacle that adds to the pride of Dubai,” added Ahmad.
Custom-engineered for the Burj Khalifa, the concept of this year’s LED display and fireworks was to present the Burj Khalifa as a ‘living entity’ befitting the persona of ‘A Virtual City’ and ‘A Living Wonder’. The six-part display highlighted the innovative and dynamic architecture of the world’s tallest building with a never-before seen pyrotechnic design.
For 65-year-old Torio Scarpitti from Italy — the journey to Dubai on New Year’s Eve was an experience of a lifetime.
“We are a group of five friends who have come to celebrate in the city of eternal sunshine and good times. Dubai is known for its grand celebrations and we wanted to be a part of it,” said Torio.
Jurgen Bauer was also among the thousands of tourists travelling to Dubai for the NYE gala event. He headed for the Souk Al Bahar Promenade straight from the airport.
“I came here at 10:30am and have decided to stay here till the fireworks get over. This is the celebration of a lifetime and I came here with my wife to watch it unfold in front of my eyes,” said an excited Jurgen.
Gold and silver strobe light effects illuminated the tower in the first act, complemented by fireworks displays from across buildings in Downtown Dubai illuminating the Dubai sky in a wash of brilliance.
The second act dressed up Burj Khalifa in colourful rings and volcanic waves, lending the tower a rainbow effect with the displays scaling up and down the 828 metres high building.
The third act created a constellation of twinkling golden stars in a glitter of pink resembling a shower of stars over Downtown Dubai, while the next featured a wave of cyclonic light effects enveloping the tower.
The final two acts tipped as the crescendo, showed quivering light sequins covering Burj Khalifa, before the final countdown began for a never-before-seen spectacle. The highest manmade point on earth became home to a million stars.