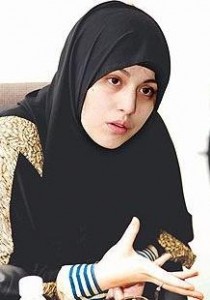 Filipino actress Queenie Padilla, the daughter of the famous bad boy of the Phillipines cinema scene, Robin Padilla, has left the showbiz scene to become a devout Muslim. In this emotional interview conducted after performing Hajj, Queenie explains how she was lost and unhappy in showbiz, and now feels happiness and contentment in her life since she made the commitment to Islam. She also thanks her father for giving her the opportunity to perform Hajj, and also her mother, who was born a muslim, as she recently appealled to Queenie and her sister to embrace the religion of Islam.