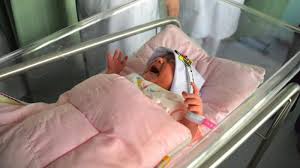 The first child to be born in the hospitals of the holy sites during the Hajj season this year has been named Mina, the Saudi Ministry of Health announced on Monday morning. The ministry made the announcement on its official Twitter page.
The mother gave birth via c-section surgery. Both mother and child are reportedly healthy and resting.
According to al-Youm newspaper, the baby girl’s parents  are from Afghanistan and she was born at the emergency hospital in Mina. Her parents apparently picked her name  from the city where she  was born.