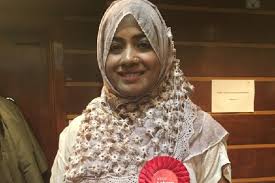 A LABOUR candidate became Worthing’s first female Muslim councillor. Henna Chowdhury was elected with 1,213 votes in Gaisford ward, unseating veteran Conservative councillor Bryan Turner to win a 300-seat majority. She was visibly overwhelmed when the results were announced at Worthing Assembly Hall yesterday to cheers from Labour activists. Ms Chowdhury said she had “no words” after the surprise upset.

She said: “I never expected to get in, so to become the first female Muslim councillor is amazing. “We have all worked so hard for this, I was at the polling station from 7am to 10pm yesterday working hard and I received so much support. “I said to my husband even if I didn’t win, I would be so happy because of the respect I have got from the public. “I have no words to explain what happened.”

Ms Chowdhury was one of five Labour candidates to win a seat yesterday, four of who were women. The party now has ten councillors in Worthing, cutting the Conservative majority to seven.
Labour Beccy Cooper said: “It’s fantastic that so many of our councillors are women, especially considering the stereotypical image of councillors. It’s fantastic to see Henna win.”