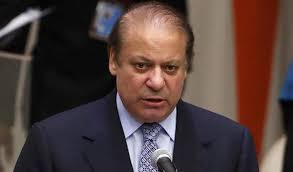 Pakistan’s former Prime Minister Nawaz Sharif has been permanently disqualified from contesting elections or holding public office following a Supreme Court ruling on Friday.
The lifetime ban was handed down by the court in a 60-page verdict that said lawmakers disqualified under Article 62(1)(f) of the constitution cannot hold public office again in their lifetime.
Sharif and Pakistan Tehreek-e-Insaf (PTI) leader Jahangir Khan Tareen were disqualified by the Supreme Court on July 28 and Dec. 15 last year, respectively, in different cases under the same article of the constitution.
“We are inclined to hold that the incapacity created for failing to meet the qualifications under Article 62 (1)(f) of the constitution imposes a permanent bar,” said the judgment issued unanimously by all five Supreme Court judges.
Chief Justice Mian Saqib Nisar, who was heading the bench, said before the verdict was announced that the public deserves “leaders of good character.”
However, political analysts say the ruling will have political implications, especially for the ruling Pakistan Muslim League-Nawaz (PML-N), whose leadership, including Sharif and his likely successor Maryam Nawaz, are already facing corruption charges.
Analyst and academic Tahir Malik said the judgment could serve as a boost to the ruling party in the coming elections.
The Supreme Court’s detailed judgment in the case, however, said: “The permanent incapacity of a candidate for election under Article 62 (1)(f) of the constitution is not an arbitrary, excessive or unreasonable curtailment of his fundamental right under Article 17(2) of the Constitution.”