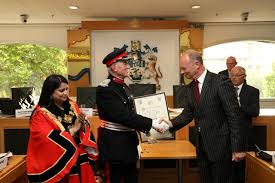 The prestigious Freedom of the Borough was awarded to Commander John Ludgate at the Council’s Annual General Meeting (AGM) last night (23 May 2018).
Serving as the county’s Deputy Lieutenant for 22 years, he has escorted the royal family during their visits to the borough.
Commander Ludgate is also Vice Chairman of the Cadet Committee at the Greater London Reserve Forces and Cadets Association, and Vice President of the Marine Society and Sea Cadets Association. He said that youth organisations are extremely important as “youth is the country’s future – all our futures”.
“I did not expect this,” Commander Ludgate said. “It is a great honour. I’m not sure if there are any special rules with this title, such as herding sheep down the street, but maybe a rickshaw down Brick Lane.
“I think Tower Hamlets is an inspirational borough reflecting all that is best in a modern, urban, aspirational community.
“Tower Hamlets has her Majesty’s palace and fortress, the Tower of London, and if you enjoy your food, just around the corner, Brick Lane. There is the high rises and financial centre of Canary Wharf and if you go a little further, you have Island Gardens looking across to Greenwich – it also has Canaletto’s famous painting for you to see.”
John Biggs, Mayor of Tower Hamlets, said: “I would like to congratulate John Ludgate on being awarded the Freedom of the Borough.
“Serving as a volunteer for more than 20 years in Tower Hamlets shows a tremendous amount of dedication, I have known him throughout this time and was delighted to see him honoured at our AGM.”
Commander Ludgate served as an Officer in the Royal Navy and Royal Navy Reserve from 1959 until 1995. In the latter years of his military service, he was appointed the HMS President of the Royal Navy Reserve based in Wapping.
Alongside this role, Commander Ludgate also pursued a career as a Chartered Accountant at Barclays Bank. He retired in 1996 and has since dedicated his time and efforts to Tower Hamlets.
He was a member of the mayoral (Cllr Abdul Aziz Sardar) visit to Bangladesh in 2004.
Nominations
He was nominated by Cllr Denise Jones: “He stood by my side to welcome the Queen, never failing to give me advice on how to address or curtsey to royalty. He was also very supportive of the Outdoor Activity Centre at Shadwell Basin and of fundraising for the preservation of the national historic steamship SS Robin.
“He was a strong advocate for encouraging young people in the borough to engage with the navy and ships, and with the Territorial Army.”
Commander Ludgate was also nominated for encouraging young people to get involved in politics and youth organisations.
Cllr Sabina Akhtar said: “He supported the Cadets from the Tower Hamlets 31 Squadron which was named the best Air Cadet Squadron in the country. I have observed John while being a young person eager to learn more about politics and John remained invested in his duties and held his position to the highest standard.”
Lesley Pavitt said: “He was very keen that youngsters in the borough were able to have opportunities and was a great supporter of the various Cadet Corps – and encouraged me to be involved.”