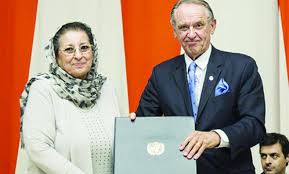 In recognition of her role in the field of population and health, Shoura Council member Thoraya Obaid received an award from the United Nations Population Fund at the UN headquarters in New York on Thursday.
The United Nations honored Obaid as well as the African Population and Health Research Center (APHRC), both recipients of the 2015 United Nations Population Award, at a ceremony held at the UN headquarters.
The winners were recognized for their outstanding contributions to human rights, reproductive health, gender equality and population research.
“Our two winners have blazed trails in improving lives and achieving sustainable development,” said UN Deputy Secretary-General Jan Eliasson at the awards ceremony. “(They) deserve this recognition and our gratitude for their contributions,” he said.
Obaid was the first woman to receive a scholarship from the Saudi government to study in the US and the first woman to be nominated by Saudi Arabia to head a UN agency. She was also the first Muslim woman to receive a medal from Union Theological Seminary and the first woman to be named Person of the Year by the late King Abdullah.
Obaid was decorated with the King Abdul Aziz Medal at the 28th National Festival of Heritage and Culture (Janadriya).
Obaid insists on sharing credit for her accomplishments with people who supported her such as her father. “He could not afford to send me to the US for my university education,” she said, explaining that he helped her get a scholarship to study abroad. “It was my father who saw the opportunity for women to break the glass ceiling, and he pushed me to do so.”
The experience has resonated with her throughout her career, demonstrating, she said, “the role of men in supporting the empowerment of women.”
Obaid is a lifelong champion of women’s and young people’s heath and empowerment. She joined the UN Economic and Social Commission for Western Asia (ESCWA) in 1975, focusing on the link between women’s empowerment and population dynamics. In 1998, she joined UNFPA and eventually rose to the rank of executive director.
She has been widely recognized for highlighting the importance of culture in advancing human rights. “I believe firmly that no change can come from the outside. It has to originate within the community,” she told UNFPA in an interview.
“Yes, there can be universal ideals such as universal human rights, but making them a reality has to be the work of the people themselves in their own communities. And they have to feel proud that they have values in their culture and belief systems that resonate with universal human rights.”
Obaid recalled a moment that illustrated these ideas. During her tenure with ESCWA, she was visiting a women’s literacy class in a rural area. “A blind old woman had brought her daughter-in-law to the class. She said, ‘I want my daughter-in-law to learn to read and write, not to remain like my generation — illiterate.’ She was there to support her daughter-in-law and to protect her from any possible criticism from her society.”
“The old woman herself was physically blind, but certainly she had a clear vision of where she wanted her family and her country to be,” added Obaid. -arabnews