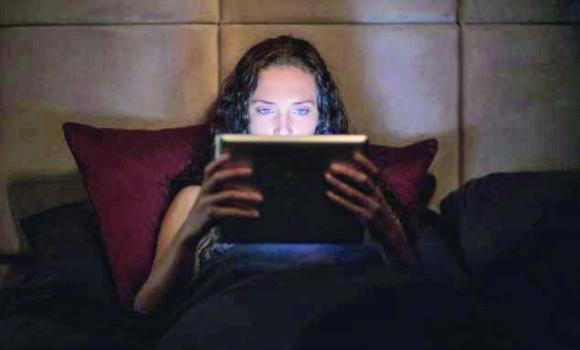 Basking in the blue glow of tablets, smartphones and other electronic devices before bedtime could be messing up our sleep patterns more profoundly than we realize, and even affecting our long-term health, according to a new study published Monday in the Proceedings of the National Academy of Sciences.
“It may be having a greater impact than we previously thought,” said Anne-Marie Chang, a professor at Penn State University and a co-author of the study, which was conducted at Brigham and Women’s Hospital in Boston.
A growing body of evidence has suggested what many people have experienced firsthand — that the pervasive glow of electronic gadgets can hinder a good night’s sleep. But researchers behind Monday’s study, which was supported by a grant from the National Institutes of Health, set out to decipher what changes in the body cause those disruptions.
During a two-week inpatient experiment involving a dozen adults, some participants were asked to read on an iPad for four hours each night before bedtime, for five consecutive nights. Others read printed books in dim light. After a week, the groups switched.
Researchers found that participants using iPads displayed reduced levels of melatonin, a hormone that typically increases in the evening and helps induce sleepiness. They took longer to fall asleep, and spent less time in restorative REM, or rapid-eye movement, sleep.
In addition, the iPad readers reported being sleepier and less alert the following morning, even after eight hours of sleep. They also displayed delayed circadian rhythms.
“There’s a lot of skepticism out there; a lot of people think this is psychological,” said Charles Czeisler, director of the Division of Sleep Medicine at Harvard Medical School. “But what we showed is that reading from light-emitting, e-reader devices has profound biological effects.”
Czeisler said that although the study used only iPads, the effect isn’t unique to that device. Other products produce similar blue-light emissions, including tablets, e-readers, smartphones, laptops and LED monitors. Czeisler said the standard Kindle e-reader, which doesn’t emit light, was an exception and was more akin to a printed book.
So other than a little grogginess, why should we worry about the apparent loss of sleep that our glowing screens are causing us?
Czeisler and Chang said that as electronic devices become only more prevalent, and as their use becomes more ubiquitous, their role in significant sleep loss could lead to long-term health consequences. For instance, chronic suppression of melatonin has been linked to increased risk of prostate, colorectal and breast cancers. And a persistent lack of sleep has been associated with obesity and diabetes.
“We introduce these devices that have medical and biological effects without requiring any health studies on their impact. . . . They don’t have to go through any evaluation like a drug would, for safety and efficacy,” Czeisler said. “I think it’s time to rethink that.”
A poll released earlier this year by the National Sleep Foundation offered a glimpse at just how pervasive electronics have become in American bedrooms. Nearly 90 percent of adults and 75 percent of children reported having at least one electronic device in their bedrooms, and many reporting having multiple devices, such as televisions, laptops and tablets.
The sleep-disrupting effects of such devices might be even more significant for older teens, ages 15 to 17, almost all of whom reported having electronic devices in their bedrooms and were far more likely to use them at night than younger children, even when an early school morning loomed.