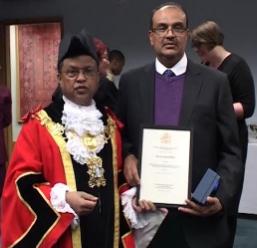 Tower Hamlets Council took an unprecedented step to honour borough’s unsung heroes and heroines to recognise them for their generosity, commitment and dedication at the annual Tower Hamlets Civic Awards Ceremony, which was held last week in Town Hall in Mulberry Place. This year, the Annual 2015 Civic Award went to Md Gulam Kibria for his outstanding contribution in business in Tower Hamlets.
Speaker of the Tower Hamlets Council and First Citizen Cllr Abdul Mukit Chunu MBE and Deputy Lieutenant Commander John Ladgate handed over the awards in the colourful award giving ceremony in Town Hall. Guests who were also presented in the event included Deputy Speaker of Tower Hamlets Council Khalis Uddin Ahmed, former Speaker Miz Lasely, Cllr and Tower Hamlets Party Conservative Party Leader Peter Gold, Tower Hamlets Council Labour Party Leader Cllr Russel Sanders, former Cllr Helal Abbas and others.
Commenting on receiving Civic Award, Gualm Kibria said that this will inspire him to contribute more and will increase the scope of his work.
He also expressed his gratitude to Bangla Mirror Editor Abdul Karim Gani for nominating him for this Civic Award.
Mohammed Gulam Kibria was born in the village of Noorpur, Osmaninagor UP Sadipur, in Sylhet. During his time spent in Bangladesh, he studied in Pailgaow High School in Jagonathpur. His father Late Sikondor Ali, worked as a soldier for the British Army and was also one of the councilors for Osmaninagor UP Sadipur. Mr Kibria comes from a large family which consists of four sisters. He is the only son and is the second eldest child in the family.
He first started his own business in the year 1980; this was a flourishing perfume business in Kingdom of U A E. Before coming to the UK in 1985, he decided to travel around a little and so he visited Singapore and the later, Malaysia.
In the year of 1986, Mr Md Gulam Kibria set up his very own construction business situated in the UK, called Oriental Contracting Co. Ltd, of which he is still the Director and Proprietor. Mr. Kibria’s business has ever since been extremely successful. It can be said without a doubt that Mr. Kibria has come far in life and done well due to his hard work, enthusiasm and determination to thrive both as a businessman and an individual.
On top of running his own business, Md Gulam Kibria is also involved with many community organizations, most of which are in Bangladesh. He is a life member of Pailgaow B N High School, which he had previously attended himself and is also a life member of the Probashi Balagonj Osmani Nagor Education Trust since 1992. In addition to that, he took on the role of being the Treasurer between 2000-2002 and General Secretary between 2002-2005 of the Trust then elected as the Chair Person and President between 2009-2011. Mr Kibria was also the President of the Probashi Balagonj- Osmani Nagar Adarsha Upozilla Shamity and the Balagonj Education Trust between 2006-2008 and the founder and chairman of Taneem Hospital from 2004, a hospital which he helped set up in his own village in Bangladesh. Md Gulam Kibria is forever giving to charity as well, and has donated money towards many schools, colleges along with mosques, roads and bridges.
During the Care taker term Mr Kibria visited the Head of State Mr Faqur Uddin and was a major donor towards the ILR Sid Disaster fund.
At this moment in time, Md Gulam Kibria lives contentedly in the East London with his wife Mrs Fazal Kibria. They have both been blessed with three wonderful and much adored sons, Zayed Kibria , Waleed Kibria and Fahad Kibria and two daughters Taneem Kibria and Sumaiyah Kibria.
His hobbies are community and charity work, playing cricket, badminton and travelling.