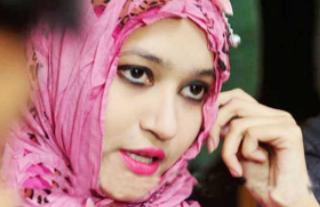 Model-actor Naznin Akter Happy on Sunday afternoon said she will withdraw the case against cricketer Rubel Hossain if he agrees to marry her.
She said this while she was taken to the Mirpur Model Police Station after forensic tests in Dhaka Medical College and Hospital of the day.
Police took her to the Medicine Department of the hospital at 01:00pm.
The 19-year-old actor filed the case under the Women and Children Repression Prevention Act (case no 37) with Mirpur police station on Saturday evening. She was taken to the Victim Support Centre in the capital’s Tejgoan afterwards.Professor Dr Habibuzzaman Chowdhury, head of the forensic medicine department, told threrport24.com the forensic tests report would be published within seven to ten days.
Happy claimed that Rubel developed an intimate relation with her on false promise of marriage.
“We came to know each other on Facebook around a year ago but he dumped me recently and got into a relationship with another girl. I have enough evidence regarding our relationship,” she told thereport24.com.
Rubel, however, could not be reached for comments.
Bangladesh Cricket Board acting CEO Nizamuddin Chowdhury said it is a legal matter.
“Do we have anything to bother about the case?” he said.
Nizamuddin refused to comment on the issue, saying he needs time to know about it in details.