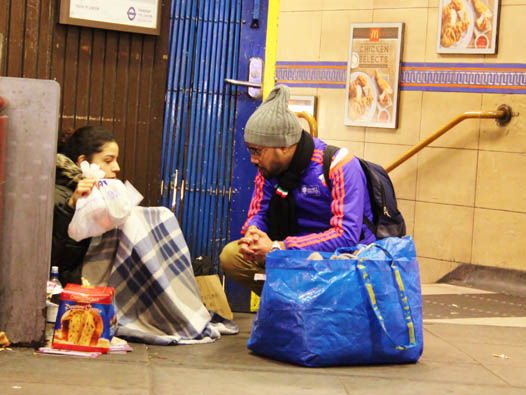 Success depends on intention. Once your intention is good then it does not matter how small or big things you are doing. In 2014 Mfa Zaman; a volunteer in London who started a project “I Am With You” with honest intention to serve the humanity. It is for homeless people who has no family, no place to sleep or couldn’t go anywhere during festive season. On 24 December, he has found most food superstore who reduced the food prices which are 5 times cheaper than normal value on Christmas Eve.  Unfortunately they could not sell it so they have to throw all this food in recycling. Then he has realised instead of waste these food; if he can buy and give theses food to those homeless who are hungry because they are not able to buy it especially during Christmas time. 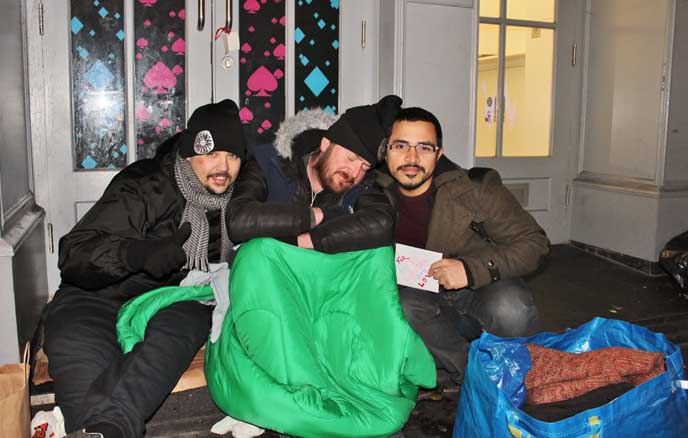 Also in winter homeless people are struggling to keep themselves in warm because lack of warm clothes. So Zaman started to collect warm clothes, sleeping bags etc from his friends to distribute them. During Christmas time; all over the UK people are celebrating with family and friends. But these homeless people are far away from celebrating this festive season. His friends had donated clothes, shoes and some money to help homeless so He buys food, sweets and greeting cards for them.
Zaman said, only in London over 8000 people are homeless in 2014-15 and it is increasing every year since 2007. There are so many reasons to become a homeless. But as a human; it is our moral duty to help and support them especially in winter time. Once upon a time I was a homeless in winter so I can feel their pain; I can hear when their heart cries. Personally I don’t have ability to help and support them but my heart cries for them. So I have decided to help if I can. When I have seen; Big food store are reducing food price massively; I have got idea to help them. So I buy this food and give it to homeless. 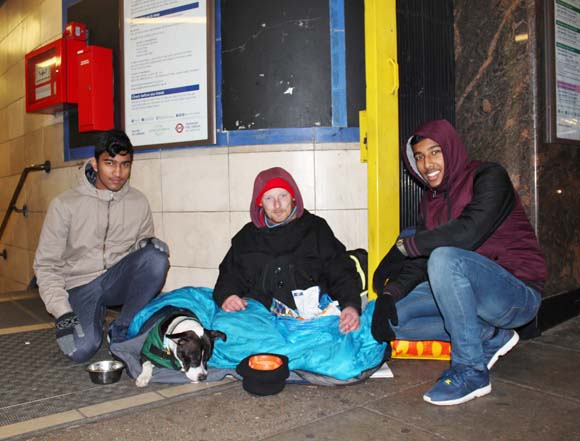 In 2015; around 30569 are sleep rough on one night across England which has increased 30% then 2014. But the actual figures are likely to be much higher. And around 8096 people are sleep rough in London in 2014-15 which is a 7% increase compared to 2014 (Crsis report). So it is an alarming sign for a society. And we throw away more than 15 million tons of food each year and 200,000 tonnes comes from the retail food shop while more than half is generated in the home. (British Retail Consortium BRC report).
Every human need to eat food, wear cloths and need a place to sleep; it’s basic human needs. But it is not only Government job to care them. As part of society we have responsibility to care those people. It does not matter how big the initiative but at least we should try. So I have taken a small effort to bring smile on homeless people in London in the 6th richest country of the world.
There are so many charities in the UK who are helping and giving shelter to homeless and as a volunteer I am helping them.  But I have realised that I should do something special for homeless on special time. Unfortunately for my personal circumstance, I don’t have financial ability to help but I have capability to help them. When I see that the old homeless person is screaming in cold weather because he/she has no warm cloth; When I see that a homeless person are crying for food because he has no money to buy food; It breaks my heart and remind me; once upon a time I was a homeless. So I started collect food, clothes, money for homeless, old people. I am really grateful to Mr Paul Dawson (London Fire Brigade) & Mrs Christine Dawson who keep supporting me with money, clothes. I am giving special thanks to Mr Zia Uddin Mohammad Umar, Ubaid Khan, Waajid Khan because last night they helped me to distribute the food. Also this year Tesco ( Green St.) has donated food to my campaign which value had £20.
Every year on Christmas Eve; I go out one street to another street with food, clothes, sleeping bags, greeting cards and sweets to bring smile on homeless people. I am not able to explain how much happy they are when they find someone next to them during festive time. The Prophet Mohammad (pbuh) said, Every good deed is Charity.
Mfa Zaman is volunteering so many years. He is helping people from all race, colour and religion as a volunteer. He has participated twice in London Marathon to raise fund for (www.justgiving.com/mfa-zaman) the disabled kids. Also he is volunteering with Team London, Inter Faith and different organization. He is the founder of Safe & Save. Zaman was London Ambassador in London Olympic 2012 and volunteer in Rugby World Cup 2015.
Mfa Zaman said, Last night on 24 December while I was distributing food, greeting cards, and sweets; these people have shared their emotion & feelings with me. A homeless woman; Layva said, I can’t stop my tears because I was feeling so cold and you came to me with warm jacket, shoe & food. It is really sweet. It’s true; I am homeless who has nothing but I am a human like everyone.  Another homeless man; Bailey said, I became a homeless because I had family problem. I used to take drugs but now stopped. I want to come back in good life. I don’t give blame anyone but I have deserved smile, good words from others. I am crying now because there are not many people like you who remember me and came to us with love, food, cards. Bless on you.
Later I have donated bread to Booth House, Whitechapel for Christmas day’s breakfast. 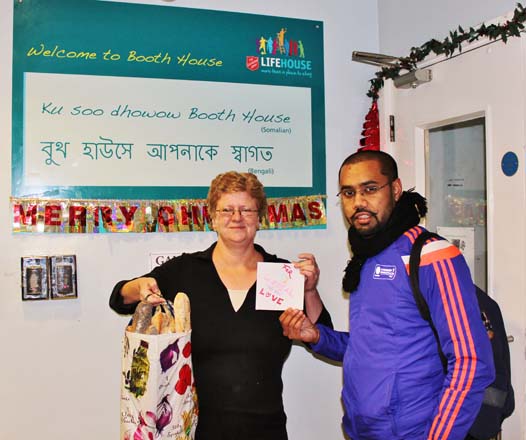 Every action has reaction. If you do something good to creation then you will get back something good in your life. The Prophet Mohammad (pbuh) said, The Almighty Allah is helping the servant as long as the servant is helping his brothers. So I am helping those who are in need. We don’t need to think or do something massive but let’s start from small; even give a Smile or say Hello to vulnerable people. A Smile counts as a Charity. I have nothing but love in my heart for these people. It makes my heart with full of peace while I see because of my small effort; someone feels happy & smiling. I would like to carry on my work volunteer work for creation. And it reminds me once Mother Teresa said, “A life not lived for others is not a life”