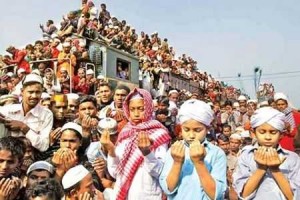 The second phase of Biswa Ijtema ended on Sunday morning with the Akheri Munajat (ending prayers) joined by millions of people.
The Munajat concluded at 10:30am. Millions of devotees joined the concluding prayers.
The second day of the second phase Bishwa Ijtema concluded with thousands of Muslim pilgrims from home and abroad on the bank of river Turag at Tongi early Saturday.
People from 33 districts attended the program. They all are praying with reciting the name of Allah and hearing the sermons.
The second phase of Bishwa Ijtema started with the “Aam Boyan” of Maulana Jamshed Ali of Bangladesh after the Fajr prayers on Friday.
Earlier, on January 26, the first phase of Biswa Ijtema ended with the Akheri Munajat.
President Abdul Hamid took part in the Akheri Munajat from the Darbar Hall of Bangabhaban.
Maulana Jubayer Al-Hasan, noted policymaker of Tablig Jamaat from India conducted the Akheri Munajat.
The first phase of Bishwa Ijtema was attended by thousands of Muslim pilgrims from home and abroad.
Bishwa Ijtema, the second largest Muslim congregation in the world after the Hajj, started with the “Aam Boyan” (main sermon) after the Fajr prayers.
Several lakh Muslims attended the Juma prayers on Ijtema ground on the eastern bank of Turag.
Special train and bus services were arranged by the Bangladesh Railway and Bangladesh Road Transport Authority for the pilgrims.