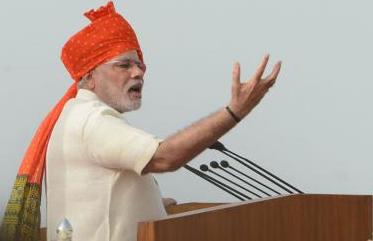 Prime Minister Narendra Modi said India had been shamed by a spate of rapes and attacks against women, and called on parents in this deeply misogynistic country to treat their sons and daughters equally in his first speech marking the country’s independence from colonial rule.
“The law will do its job and do it strictly but as a society every parent also has a responsibility to teach their sons the difference between right and wrong,” Modi said as he addressed the nation from the Red Fort, the sprawling 17th century fortress that was once home to India’s medieval Mughal rulers.
“Today when we hear news reports of rapes, our heads hang in shame,” Modi said, addressing a growing anger against the nation’s persistent violence against women.
A fatal gang rape on board a moving bus in the Indian capital in December 2012 enraged a country long inured to sexual violence against women. Amid scores of public protests new and tougher legislation was enacted doubling prison terms for rapists to 20 years and criminalyzing voyeurism, stalking and the trafficking of women.
Modi called on all lawmakers to ensure that separate toilets were built for girls and women. A lack of private toilets in schools has been cited as a reason for hundreds of thousands of young girls dropping out of schools. Women in small towns and villages across India are often forced to use faraway fields as toilets where they are often harassed and sometimes face sexual violence.
Dressed in an off-white tunic and loose pants and a bright red turban, Modi made the hour-long speech without a prepared text. He did not speak from behind a bullet-proof screen, the first prime minister to do so in almost 30 years.
India gained independence from British rule in 1947.
Modi and his Hindu nationalist Bharatiya Janata Party swept into power in May, in the biggest electoral upset this country has seen in three decades. His main electoral plank had been to boost an economy that had slowed down to 5 percent growth in the last two years. He promised to wipe out endemic corruption, create more jobs and control soaring inflation.
While he announced no specific policies on Friday, he again vowed to work to pull millions of Indians out of poverty, calling himself India’s “prime servant” and not prime minister.
He said his goal was to “eradicate” poverty in India, where hundreds of millions live on less than a dollar a day.
He said his government would replace India’s Planning Commission, which laid out the frame-work for India’s socialist-style economy for decades, with a modern institution.