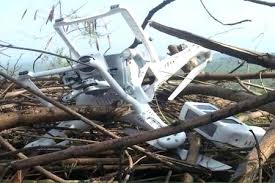 Pakistani military forces have shot down an Indian surveillance drone in Bhimber, Azad Kashmir along the Line of Control.

The Himalayan territory of Kashmir, which is the main contention, between the two countries, is divided between India and Pakistan by the UN-monitored de facto border of LoC. The territory is claimed in full by both the countries.