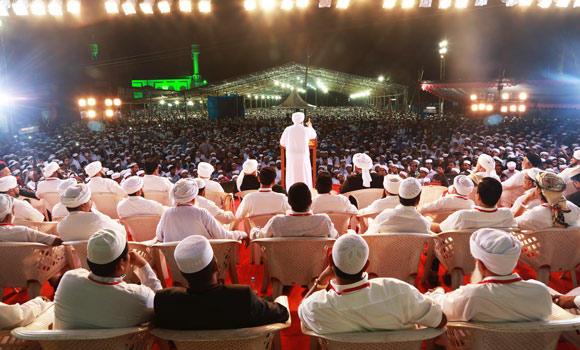 ASHRAF PADANNA: Hundreds of thousands of believers gathered at the Swalath Nagar in the Muslim-dominated Malappuram district in the southern Indian state of Kerala overnight Thursday in what is claimed as the the world’s third largest Ramadan congregation.
Organizers say some half a million people attended the annual prayer meet in the past two years and they expect similar or increased numbers this year.
Besides believers from different parts of India, mainly from the northern Malabar region of the state, a few people have come from abroad, including the UK, Australia, Malaysia and Hong Kong, most of them people of Indian origin.
Jeddah-based Al-Abeer medical group, which runs hospitals and clinics in India and the Gulf countries, have made elaborate arrangements for medical emergency, including a 24X7 mobile clinic and ambulances equipped with specialist doctors.
The prayers were held at 15 venues, including nine playgrounds, in a length of 10 kilometers along the national highway where big screens were erected to display the proceedings at the main venue for others to follow.
“We distributed 100,000 food packets for breaking the fast today and double that number for Suhoor, the pre-fast meal,” said Ummer Melmuri, a spokesman for the Ma’din Academy, which conducts the annual prayer gathering for the past 27 years here.
Since 1986, they pray for the world peace and take a pledge against terrorism. This year too, Ma’din chairman Syed Ibrahim Khaleel ul-Bukhari led the concluding prayers and administered the pledge.
The killings in Gaza also figured in the prayers this time. They urged India to take a tough stand against the bloodshed in the Middle East and not to deviate from its principled foreign policy. It also hailed the country’s stand in favour of United Nations Human Rights Council (UNHRC) resolution to launch a probe into Israeli attack on civilians.
“It is our responsibility to pray for peace and tolerance in the world, especially in Palestine, Iraq and Syria where men, women and children are brutally killed,” Bukhari said.
They sought divine forgiveness for their sins on the eve of the 27th day of Ramadan in anticipation of the Laylat al-Qadr or the “night of power” described by the Holy Qur’an as “better than thousand nights” when the prayers are answered in many folds. “Thousands raise their hands in unison seeking spiritual salvation as the prayers progress. This will conclude at around 3 am before the pre-fast meals and the mandatory morning prayers that mark the beginning of another day of fasting,” said Melmuri.
The program began with an Itikaf session of daylong retreat in Ma’din grand mosque. Recitation of Qur’an and hadith, Prophet Muhammad’s sayings followed. Iftar sessions were held on different grounds while the mega prayer conference began soon after Taraweeh preceded by the mandatory Isha prayers.
“God has given man the power and insight to choose his course. God has also given man the attribute of knowledge in an abstract form. This is the divine trust that man has assumed. We have to fortify it and work for humanity. Ramadan is the best time to strengthen the inner beauty of togetherness,” Bukhari said in his opening remarks.
“We reaffirm that usurping the rights of fellow-beings is a grave offence to humanity. We honor the dignity of others. Even when we take pride in being a Muslim, we respect and honor all other faiths and their followers. We will keep a continuous vigil against forces that work to destroy the oneness of humanity”.
All India Sunni Jamiyyathul Ulama general secretary Kanthapuram AP Aboobacker Musliar inaugurated the meet while Samastha Kerala Jamiyyathul Ulama treasurer Sayed Ali Bafaqi Thangal presided over.
The prayers went into late night as people continued to flow into the Ma’din grounds. Traffic along the national highway was diverted. A few of the 15 covered grounds were exclusively kept apart for women.
Extensive parking arrangements were in place. Fire and rescue units helped the smooth functioning while the district administration and the police extended their support. A 5555-member volunteer group controlled the crowd.
“This is the third largest congregation of the faithful after Makkah and Madinah where the believers free themselves from all worries and beseech the almighty for spiritual deliverance with raised hands,” Bukhari said earlier.
Those who fail to make their physical presence were able to take part in the prayers, watching live telecast on television or following the live internet stream and joining them to chant each word of the prayers together with hundreds of thousands gathered here.
Ma’din Academy runs 30 educational institutions and charity with 17,800 students on its roll from primary schools to postgraduate colleges. It also conducts various programs with the theme of interfaith harmony and tolerance.
The group is one of the main organizers of the International Interfaith Harmony Seminar held every year in connection with the World Interfaith Harmony Week of the United Nations at the International Islamic University of Malaysia every year.
It is also part of G20 Interfaith Summit organized by the Center for Interfaith Culture and Dialogue of Australia’s Griffith University coinciding with the G20 Summit in Brisbane later this year.