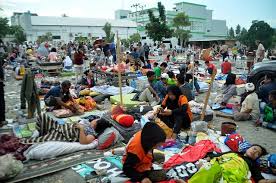 Indonesian’s president on Sunday called on people to pray for victims of the earthquake and tsunami on the island of Sulawesi.

The tsunami, towering up to three meters high, hit Palu, capital of the Central Sulawesi province, and the northeast of the nearby Donggala Regency.

A total of 1203 of the deaths were confirmed in Palu, while the other 11 victims are from the city of Donggala, National Disaster Agency spokesman Sutopo Purwo Nugroho told reporters.

Joko is set later to visit Palu, capital of the Central Sulawesi province, to inspect the damage.

At least 2.4 million people have been affected by the quake in 13 sub-districts in Donggala and eight sub-districts in Palu, said Indonesia’s disaster management agency BNPB, cited by Antara.

At least 100 rescue workers have been sent to help victims in Palu and Donggala.

Over the last two months, three more earthquakes with magnitudes 6.3, 6.9, and 7 hit the eastern island of Lombok, killing a total of 563 people.

Indonesia lies within the Pacific Ocean’s “Ring of Fire” where tectonic plates collide and cause frequent seismic and volcanic activity.

On Dec. 26, 2004, a magnitude 9.1 earthquake struck the eastern coast of Sumatra, triggering a tsunami that killed around 230,000 people as it tore along the coasts of Sri Lanka, India, Malaysia, Indonesia, and Thailand.