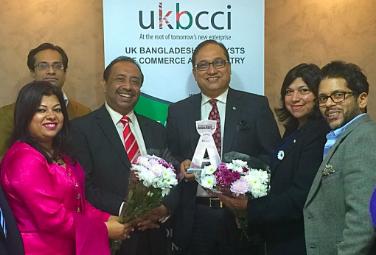 The astounding global success of the Seamark organisation was recognised yet again when its CEO and Chairman Iqbal Ahmed OBE won Business Person of the Year in the prestigious Asian Achievers Awards on Friday, 18th September, at the London’s Grosvenor House Hotel on Park Lane Mayfair.
Before a star-studded audience, Iqbal was presented with his coveted award by the chairman of the judging panel, Sir Vince Cable, former Secretary of State for Business, Innovation and Skills. Further judges included the former Chairman of the BBC and current Chairman of the Football Association Greg Dyke, founder of fashion brand Ultimo Baroness Michelle Mone OBE and Chairman of Queen Elizabeth’s 100th Anniversary celebrations in 2000 Major General Sir Evelyn John Webb-Carter.
The Manchester-based seafood tycoon triumphed over three other outstanding nominees in this important category – Jasminder Singh of the Mayfair Hotel, Zameer Choudrey of the Bestway Group and Surinder Arora of Arora Hotels. The judging criteria were to find “a business person who is successful in every sense of the word and can demonstrate a genuine passion for social issues.”
Iqbal’s award came in recognition of his development of Seamark from a small family business in Oldham to the global establishment with a multicultural workforce it is today. It is also a caring company, bringing aid to Iqbal’s native Bangladesh through the Iqbal Bros Foundation – a charity to help and improve the role of people in the third world countries, through education, training, housing and healthcare.
Established in 1976 by brothers Iqbal, Kamal and Bilal Ahmed, Seamark Group has grown to become one of the largest international importers and exporters of seafood, vegetables, pastry and other value added products.  The company has its own fleet of deep sea fishing trawlers, factories and processing plant in Bangladesh, an office and distribution centre in New York and in the UK, headquarters and processing plants and distribution centres in Manchester as well as well as in London. Seamark’s daily output of shrimp and prawns is an outstanding one million per hour. The Group’s total annual turnover stands at $400 million globally. To learn more about Seamark’s worldwide operations visit www.seamark.co.uk.
Iqbal is also the founder and Chairman of the Board of NRB Bank Limited in Bangladesh and Chairman of Britain’s leading British Bangladeshi business organisation, the UK Bangladesh Catalysts of Commerce and Industry (UKBCCI).  The UKBCCI works to encourage, inspire and nurture enterprise.
The AAA, also known as The People’s Choice Awards, celebrates annually the British Asian community’s outstanding success stories in business, the professions, sport and entertainment. It is organised by Asian Business Publications. Their publisher/editor CB Patel said: “In the landmark 15th year of the Asian Achievers Awards, it brings me much pride to pay special homage to British Asian men and women who help to both run our country and also protect it. Their remarkable deeds can be life-changing and even life-saving and this is our opportunity to thank them.”