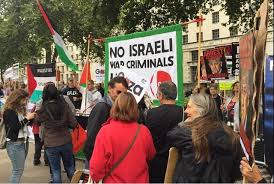 Protesters are gathering outside Downing Street to call on British Prime Minister David Cameron to impose sanctions on Israel as Prime Minister Benjamin Netanyahu arrives in the UK.
Netanyahu’s two-day trip to Britain aims to discuss a range of issues including stalled peace talks and the labeling of products made in Jewish settlements.
While UK trade with Israel is flourishing, public support for Netanyahu has dropped during the past year and a petition calling for his arrest for “war crimes” has won the support of over 100,000 signatories.
The protest, organized by the Palestine Solidarity Campaign (PSC) with the support of various groups including War on Want, Palestine Forum in Britain, Campaign for Nuclear Disarmament (CND), Stop the War, and British Muslim Initiative, is taking place opposite Downing Street.
Demonstrators call for Prime Minister Cameron to “impose sanctions and an immediate arms embargo on Israel.”
Besides they also delivered a letter to Downing Street, calling for the UK to address Netanyahu’s “war crimes” during the Israeli attack onGaza in summer 2014.
“As Israeli Prime Minister, Mr. Netanyahu bears direct responsibility for the war crimes identified by the UN Human Rights Council following Israel’s brutal assault on Gaza last summer, which killed more than 2,000 Palestinian women, children and men in the space of seven weeks,” the letter reads.
“War crimes are also being committed through the presence of Israeli settlers in the West Bank, in contravention of the 1949 Geneva Convention. The illegal settlements they live in continue to expand under Mr. Netanyahu’s government, in an ongoing acquisition of Palestinian territory which is war by another name.
“We urge [Cameron] to reconsider his visit and, instead of welcoming him to the UK, to impose an immediate arms embargo and sanctions on Israel until it complies with international law and ends the occupation and the siege on Gaza,” it adds.
Netanyahu and Cameron will meet on Thursday to discuss international relations in the Middle East, struggle against ISIL, as well as bilateral agreements.