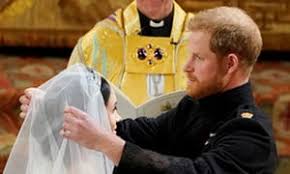 Prince Harry and Meghan Markle have been declared husband and wife, following a ceremony at Windsor Castle.
The couple exchanged vows and rings before the Queen and 600 guests at St George’s Chapel.
Wearing a dress by British designer Clare Waight Keller, Ms Markle was met by Prince Charles, who walked her down the aisle.
Following their marriage, the couple will be known as the Duke and Duchess of Sussex.
Among the guests were Oprah Winfrey, George and Amal Clooney, David and Victoria Beckham and Sir Elton John.
Ms Markle had 10 bridesmaids and pageboys – including Prince George and Princess Charlotte.
She wore Queen Mary’s diamond bandeau tiara, loaned to her by the Queen.
Her sculpted white dress was designed by Ms Waight Keller for French fashion house Givenchy.
The look was completed with a veil measuring 5m and embroidered with the flowers of each country in the Commonwealth.
All 600 guests will then attend a lunchtime reception at St George’s Hall, which is being given by the Queen.
During this reception, Ms Markle will reportedly break with tradition for royal brides and make a speech.
Other celebrities in attendance included tennis star Serena Williams, TV personality James Corden, singer James Blunt, actor Carey Mulligan, and rugby star Jonny Wilkinson.
Prince Harry’s uncle, Earl Spencer, the Duchess of York, Sarah Ferguson, and the Duchess of Cambridge’s sister Pippa Middleton, were also invited.
Politicians, including Prime Minister Theresa May, were not invited, as it is not a state event. -BBC