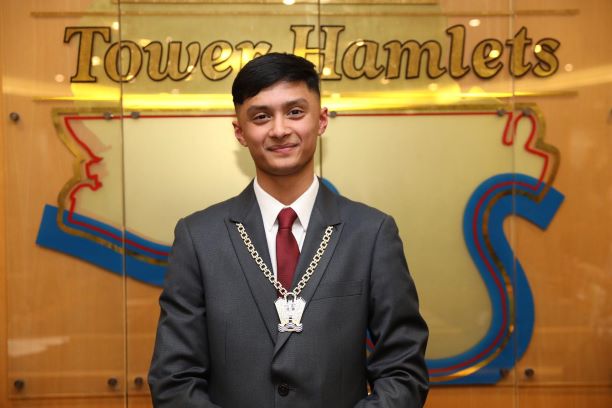 Jaami Barry has been elected as the new Young Mayor of Tower Hamlets and will serve in the role for two years. Jaami topped the poll with 2,761 votes beating eleven other candidates following elections held in participating schools in the borough this week. The result was announced by the Returning Officer for the election and Chief Executive of Tower Hamlets Council Will Tuckley.

Immediately after the announcement, Jaami was inaugurated into the role at a ceremony in the council chamber in the town hall attended by the outgoing Young Mayor, Fahimul Islam, and Mayor John Biggs.

Five other candidates were also elected to support the young mayor who will serve as youth leads in the key areas of: social and economic growth; environment; health and wellbeing; community; and communications. Their portfolios will be decided over the next weeks.
Jaami Barry, Young Mayor said: “It’s a great honour to be elected as the young mayor of the borough where I grew up and live. I will do my best to serve the young people of Tower Hamlets and ensure that their views are part of shaping future council services.”

Will Tuckley, Returning Officer for the election and Chief Executive of Tower Hamlets Council said: “Many congratulations to Jaami on his win. He will carry out important work on the youth council with his deputies. It’s crucial that we hear and act on the views of young people in how we work at the council.”

The young mayor and the deputy mayors will serve for two years and their role will be to voice the views of young people in the borough.