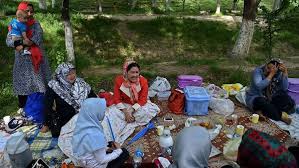 Kabul’s historic Bagh-e Babur gardens are one of the few remaining vestiges of serenity in a city awash with snipers, checkpoints and post-traumatic stress.
Laid out in the 16th century by the Mughal emperor Babur and restored after the 2001 US-led invasion and fall of the Taliban, they have become a magnet for culture and art aficionados.
The 11-hectare (27-acre) gardens have emerged as an attractive venue for plays and Western-Eastern music concerts in a city with ever-shrinking space for cultural activities.
“We come here with our friends together for picnics and to pass the time. We enjoy coming here often,” said Barakatullah, a construction company employee.
After 30 years of conflict, the gardens are an unexpected sight in the heart of Kabul.
“Afghans have suffered a lot in the past. It’s good to come here and take a break from studies and it’s also refreshing to see the greenery,” said Mohammad Ismail, a 20-year-old university student.
The Babur gardens were heavily damaged during 1990s conflict when many trees and buildings were completely destroyed, said Ajmal Maiwandi from the Aga Khan Foundation.
A key challenge was to de-mine the site. “Since this was the front line between warring factions, there was much ordinance and many mines and many other types of explosives that needed to be discovered,” he said.
But in Kabul, cultural centres are perceived as soft targets for militants, meaning there is a heavy security presence.
“There are soldiers guarding the main gate,” said 12-year-old school pupil Milad.
“They do body searches, so it’s really difficult for a suicide bomber to get in the garden.”
Despite park-goers’ confidence, a string of attacks on public venues, particularly those where foreigners congregate, have fueled fears of encroaching violence.
In mid-May, 14 people were killed in an attack on a Kabul guest house that targeted dozens attending a concert. And just on Thursday, militants waged an all all-night battle with security forces who thwarted their plans to storm another guesthouse.
And as the Taliban step up their spring offensive, fears are stoked once again for this haven of tranquility in a troubled city.