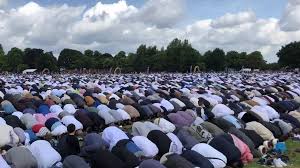 Birmingham hosted Europe’s largest Eid al-Fitr gathering with more than 140,000 people attending the celebration on Friday.
Organized by the Green Lane Masjid and Community Centre (GLMCC), the large gathering saw the attendees say the morning Eid prayer and later enjoy festivities such as the fun fair and miniature golf as well as indulging in a variety of cuisines from around the world.
The GLMCC launched the Celebrate Eid initiative seven years ago that allows for such a gathering to take place in the U.K.’s second largest city.
“This celebration is one of the most important in the Islamic religious calendar and it’s an opportunity for us all to come together in peace and unity,” a spokesperson from the event said to the Evening Standard.
“We’re overwhelmed that so many people from different faiths and from across the world have travelled to Birmingham for this year’s Celebrate Eid,” he added.
Celebrate Eid has grown over the years since its inception, with 12,000 attendees in 2011 to over 140,000 this year.
Birmingham is the U.K.’s second largest city with a population of 3.7 million people. The city has the largest Muslim population in the U.K. outside of London with 21.8 percent being Muslim.
Eid al-Fitr marks the end of the holy month of Ramadan, in which Muslims around the world fast.