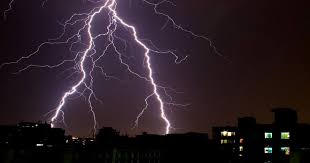 The death toll from lightning strikes across Bangladesh in a single day rose to 27, with six of them in Habiganj alone.
At least three people died in Rajshahi and two in Kishoreganj, Sunamganj and Nilphamari each. One person died in Gaibandha, Jamalpur, Mymensingh and Manikganj each. All died in Wednesday’s thunderstorms.
According to the government data, 70 people died in Bangladesh in March and July.
Most of the victims were farmers harvesting or carrying paddy home from fields during storms when they were struck by lightning bolts.