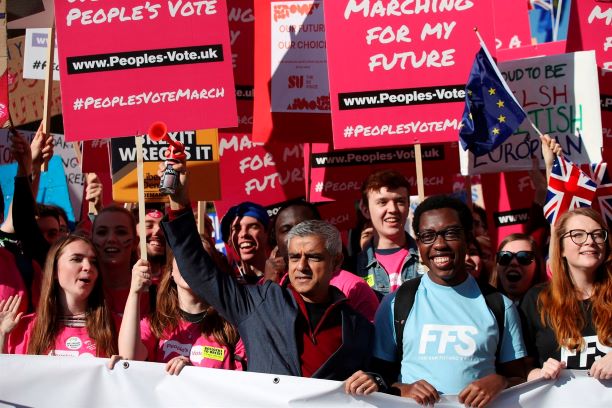 Tens of thousands of supporters of the European Union began marching through London on Saturday as part of what organisers say will be the largest ever demonstration to demand that the British government holds a public vote on the terms of Brexit.

The protesters waved the blue and gold flag of the EU and held up “Bollocks to Brexit” banners under sunny skies to call for another referendum on the eventual deal on how Britain will leave the world’s biggest trading bloc.

The march comes as pressure builds on Prime Minister Theresa May over her negotiating strategy with just over five months until Britain is due to leave. There is, so far, no divorce deal and some rebels in May’s Conservative Party have threatened to vote down a deal if she clinches one.

James McGrory, one of the organisers of the march, said the public should have the chance to change their minds because the decision will impact their lives for generations. “People think the Brexit negotiations are a total mess, they have no faith in the government to deliver the promises that were made, partly because they cannot be delivered,” he said.

At the march, demonstrators carried placards saying “Brexit is pants” and “time for an EU turn.” Members of parliament from all the main political parties are set to join the demonstration.