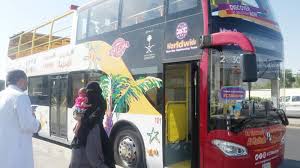 Fatima Muhammad: Visitors to the holy city of Madinah can now go on a special bus tour of historical sites via a new service called City Sightseeing in Madinah.
The service operates in 160 cities across the world and was introduced in Madinah this year to offer pilgrims and visitors a unique tour of the city’s landmarks.
Tickets cost SR80 and are valid for 24 hours after purchase. Buses allow pilgrims to hop on and hop off along fixed routes with City Sightseeing buses frequenting designated stops every 30 minutes.
The initiative is being supervised by the Madinah Development Authority and run by Jawla. There are 11 stops and visitors are able to listen to historical and cultural information along the route in eight languages that include Arabic, English, French, Turkish, Urdu, Persian, Malaysian and Indonesian.
The buses are double-decker buses and able to carry 63 passengers at any one time. Operators say that the buses can carry a total 675,000 pilgrims a year with plans to increase this capacity to 1.35 million.
The 11 sights that the buses stop at include: the Holy Mosque, Al-Baqi, Al-Manakha Open Area, Al-Salam Gate, Uhad Mosque, Al-Nour Mall, Sultana Shopping Street, Al-Qiblatain Mosque, Seven Mosques near the location of the Battle of the Trench, Quba Mosque and Hijaz Railway Station.
“The aim is to increase the number of stops to 33,” said Taha Al-Jwaiber, Operations Controller at the City Sightseeing Madinah. “We are now increasing awareness about the project. At the same time we are working on adding more stops to the list to turn Madinah into a tourist destination that has much to offer.”
About the 11 stops:
1. The Holy Mosque: The tour begins from here with the main City Sightseeing Station in front of Gate 21 which is located to the north of the Holy Mosque.
2. Al-Salam Gate: This is the main gate that leads to the section of the Holy Mosque where pilgrims offer their greetings at the Prophet’s (peace be upon him) grave. It is located in the western side of the Holy Mosque.
3. Al-Manakha: This is an open area located towards the west of the Holy Mosque where the Prophet Muhammad (peace be upon him) established a market. Linguistically, the word “manakha” refers to a place where camels rest after a trip. This area is also home to the Al-Gamama Mosque or Cloud Mosque. The Prophet Muhammad (peace be upon him) used to offer Eid prayers at the location of this mosque and also the Salat al-Istisqa (prayer beseeching rain). The area around Al-Gamama Mosque has been recently developed and is home to fountains and seats where pilgrims can rest and relax. Other mosques in the vicinity include the Abu Bakar Mosque and Omar Mosque.
4. Al-Baqi Cemetery: This holy graveyard is located towards the southeast of the Holy Mosque. The cemetery is the resting place of a large number of Companions and members of the Prophet’s (PBUH) family.
5. Uhad Mountain: This is the location where the famous Battle of Uhad took place. Visitors are also able to carefully climb a small hillock on which the Prophet (PBUH) stationed a group of Muslim archers during the battle. Visitors are able to buy local produce here like dates, henna, herbs and prayer beads.
6. Al-Qiblatain Mosque: This is the famous mosque where the Prophet (PBUH) was commanded, during prayer, to change the direction of his prayer from Al-Aqsa in Bayt Al-Maqdis in Occupied Palestine to the Grand Mosque in Makkah.
7. Quba Mosque: This is a white large mosque with minarets and many palm trees. Visitors often pray in this mosque, as was the Prophet’s (PBUH) habit on Saturdays. There is an exhibition near the mosque showcasing the city’s main sights and Arabic manuscripts. There are also many local street sellers in the vicinity of the mosque selling fresh eggs, local herbs, prayer beads and flowers.
8. Al-Nour Mall: This is a modern shopping complex full of stores, a food court and an entertainment area for children.
9. Sultana Street: This is also a modern shopping area that is also home to a number of popular eateries.
10. The Seven Mosques: This is a large mosque built on seven small mosques towards the south of Sala’ Mountain where the Battle of Khandaq or the Battle of the Trench took place. The same area is also home to Al-Fath Mosque where the Prophet (PBUH) prayed and was promised he would conquer Makkah.
11. Al-Hijaz Station: This is the Ottoman era railway station that has been turned into a museum about the holy city.
For more information, please visit https://city-sightseeing.com/en/125/medina