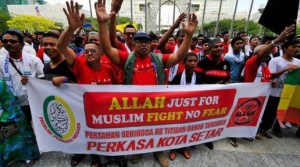 A Malaysia appeals court on Monday upheld a government ban against the use of the word “Allah” to refer to God in non-Muslim faiths, reported the Associated Press.
This action has overruled claims by Christian groups in the country that the decision violates their religious rights.
Malaysian Judge Mohammad Apandi Ali, who led a three-member appeals court panel, stated that the use of “Allah” was “not an integral part of the faith and practice of Christianity.”
“It is our judgment that there is no infringement of any constitutional rights” in the ban, he said.
“We could find no reason why the [Catholic newspaper] is so adamant to use the word ‘Allah’ in their weekly. Such usage if allowed will inevitably cause confusion within the community.”
The Rev. Lawrence Andrew, editor of the Catholic newspaper, The Herald, said they plan to appeal Monday’s verdict in Malaysia’s Federal Court, reported the Associated Press.
“We are greatly disappointed and dismayed,” he said.
“This is unrealistic. It is a retrograde step in the development of law in relation to the fundamental liberty of religious minorities.”
Malaysia has been witness to a long-term dispute concerning the right to use “Allah” in Christianity, the minister’s fresh remarks came ahead of court proceedings, over the point of contention, which are due to start next week.
Some observers have expressed fear that a ruling in the Malay-dominated government’s favor could also be used as precedent to have “Allah” removed from Bibles, reported Agence France-Presse.
Muslims make up the majority of the population with 60 percent of the country’s 28 million people, while Christians account for about nine percent.
Monday’s ruling in the Court of Appeals overturns a decision by a lower court nearly four years ago that ruled against the government ban.
The row first erupted in 2008 and then in 2009 the High Court made a landmark ruling in favor of the Catholic Church, when it said the word was not the exclusive right of Muslims.
In January 2010, the Home Ministry filed an appeal against the ruling, but there was a three-year hiatus before the dates were fixed for hearing at the Court of Appeal.