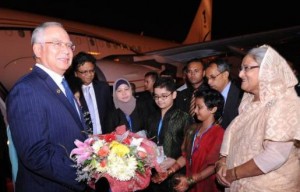 Malaysian Prime Minister Najib Razak arrived in Dhaka on Sunday evening on a two-day visit that officials say was aimed at furthering bilateral relations.
Prime Minister Sheikh Hasina received him and his wife Rosmah Mansor at the Hazrat Shahjalal International Airport at 8:07 pm.
The red carpet was rolled out to welcome the Malaysian Premier in a rousing reception.
It is his first official visit to Bangladesh at the invitation of his Bangladesh’s counterpart.
Upon his arrival, Hasina introduced him with her Cabinet ministers, the chiefs of the three services, other senior civil and military officials at the airport’s VVIP terminal.
Two little children welcomed the Malaysian Prime Minister, his wife, and entourage with bouquets.
He was then taken to Sonargaon Hotel, where he will stay during the visit, in a motorcade.
A 62-member delegation including Foreign Minister Anifah Aman and Malaysia’s Special Envoy to South Asia Samy Vellu is accompanying him.