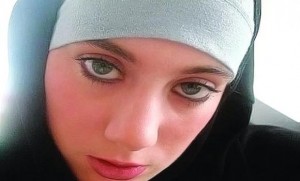 Interpol has issued an arrest warrant at the request of Kenya for a British citizen dubbed as the “white widow,” following a deadly attack on a shopping center in Nairobi that killed 71 people.
The international police agency issued an alert for 29-year-old Samantha Lewthwaite on Thursday.
The announcement of Interpol’s “red notice” made no mention of the siege of the Westgate mall by Al-Shabab group.
British police have cited Lewthwaite as a possible suspect.
Lewthwaite, a Muslim convert, whose first husband was one of the suicide bombers in the 2005 attack on the London transit system that killed 52 commuters is wanted by Kenyan authorities on charges of possession of explosives and conspiracy to commit a felony dating back to December 2011.
The Interpol alert requires member countries to detain the suspect pending extradition procedures.
It said she was also believed to use the alias “Natalie Webb.”
Lewthwaite has been on the run for months and was reported to have crossed into Somalia last year.
Interpol’s red notice acts like a global wanted poster, but it’s also a concession by the Kenyan security forces that she is an international danger, not just someone who should be regarded as a passport fraudster.