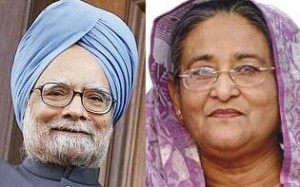 India’s Prime Minister Manmohan Singh phoned his Bangladesh’s counterpart Sheikh Hasina on Sunday, minutes after she was sworn in as Prime Minister for the second successive term.
According to the Indian Ministry of External Affairs, Singh congratulated Hasina on her assuming the office of Prime Minister.
He also sent a message of felicitations to Hasina. During the phone call he conveyed “his good wishes” to her on her assumption of the office.
“He wished her and the people of Bangladesh all success in the endeavour to strengthen democratic institutions in Bangladesh,” it said.
The ruling Awami League won a landslide victory in the much-talked-about Jan 5 elections in which more than half of the seats returned winners uncontested as the BNP boycotted the poll.
International communities’ particularly the US widely criticised the elections while India understood it was “a constitutional necessity” for Bangladesh.
Sheikh Hasina formed her cabinet with 29 ministers, 17 state ministers and two deputy ministers.